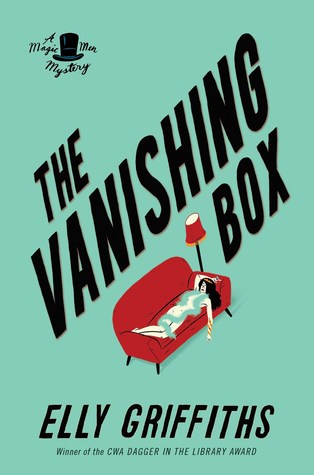 This is my second venture into Elly Griffiths’ Magic Men Mystery series.  It’s a clever gimmick, combining magicians and the WWII era.

Max Mephisto and his daughter Ruby are headlining at the Brighton Hippodrome, the largest theatre in the city.  It’s a real coup for the aging magician to get a gig like this. Also performing on the same bill, though, is a tableau act with nearly naked women as living statues, recreating famous works of art. It’s daring and risque and not nearly as classy as an act should be at the Hippodrome. Things get even worse when girls go missing and are later found dead, killed and then set up into tableau poses.

I generally like what I’ve read in this series – it’s clever, well thought through, and generally a pretty smooth read. But for those of us who enjoy something just a little bit meatier, it’s also just a tad dull.

For the most part, this is a cozy mystery. This is a genre I’m typically not excited about – I don’t read mysteries to try to figure out who dunnit, but for the thrill of the hunt. The hunt here is interesting and methodical and I absolutely love the background of these characters.  The magician angle is interesting and the living portraits or tableau act is fascinating.  I know that living tableaus were somewhat popular a decade or so ago, here in the U.S., but I’m curious if there was such a thing in Britain in the 1950’s.  If there was, I can imagine the outrage and scandal it might have caused to have women naked or nearly naked in the name of ‘art’ for men to ogle.

This is the sort of series that I might pick up if I’m wandering a bookstore looking for something to read.  I wouldn’t be disappointed, but I wouldn’t be actively seeking out each new book in the series.

Looking for a good book? The Vanishing Box by Elly Griffiths is a serviceable mystery with great characters and settings but just lacks a little something extra that could make it really engaging.