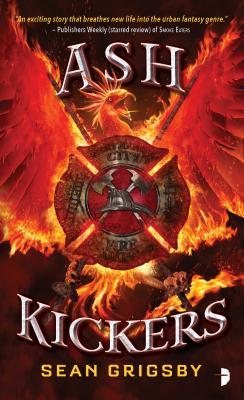 Author Sean Grigsby has done done something here that I don’t think I’ve seen very often in the world of sequels … using a different character’s point of view (a character that was prominent in the first book – while the main protagonist from the first book is still prominent here) and dialing up the action, and the threat level.

Tamerica Williams is a smoke eater. Smoke eaters are sort of like firefighters with the bonus that they can breathe normally even when in a room full of smoke.  Smoke eaters don’t fight fires … they fight dragons. But since the events of the previous book, smoke eaters aren’t supposed to kill dragons any more, they’re supposed to capture them.  Dragon blood can be used to sure all sports of maladies (it is also what gives a smoke eater the ability to breathe smokey air).

At the start of the book, Tamerica is doing everything she can to provoke the dragon she’s been sent to capture. She can kill a dragon if it’s in self defense. But old habits die hard and Tamerica wants this dragon to die harder.

Things happen quickly and Tamerica’s partner is nearly killed, the dragon is dead and explodes in a rush of flame that she’s never seen happen before. Chief Brannigan has every right to kick her out of the force for endangering her partner the way she did, but instead of kicking her out or even placing her on unpaid leave, he promotes her to Captain status. (A good play, as it turns out, as she becomes hyper-aware of what her teammates are doing and if they’re following the book.)

If we thought that the ghosts and dragons that we saw in the first book were terrifying (and they were!) the smoke eater battles are about to get exponentially worse as the intense fires are a result of a conversion in which a phoenix rises from the dragon ashes.  And a cult of phoenix worshipers are going to give the smoke eaters some extra trouble.

This book was just hot fun.

I liked the first book a lot, though I was disappointed with the teen-boy attitude of the mature Brannigan. Tamerica doesn’t have that same issue, but she is just a little bland – which is strange, since in her off time she’s a DJ. Still, Grigsby creates a really spectacular world (ghosts, dragons, and a phoenix?!) and moves the story along swiftly. The characters could be a little more nuanced, but I would continue to read stories set in this world.

Looking for a good book? Ash Kickers, by Sean Grigsby, is a fun, energetic urban fantasy. The characters might not capture your interest, but the story and world definitely will.