PLAYING TO THE GODS – Peter Rader 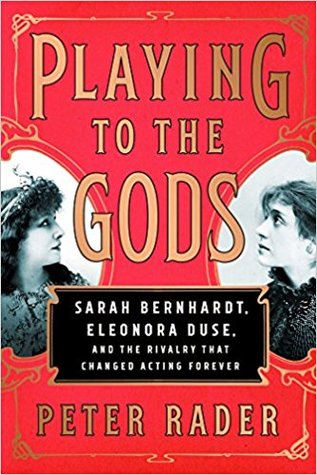 Sarah Bernhardt. Eleonora Duse. Most people are familiar with Sarah’s name, even if they don’t know why she is famous. Only a few dedicated history or theatre buffs probably know the name of Eleonora Duse. But at one time their rivalry was watched and reported internationally and the art of acting, as we know it today, largely came about through this clash of theatre titans.

Biographer Peter Rader has written an excellent account of both actresses, their history, their rise (and fall [and rise again]) in the theatre world, their extremely different approaches to acting, and their rivalry.

Sarah Bernhardt is likely one of the first actors to understand that the press/media could be put to good use and that there really was no such thing as ‘bad press.’ She became bigger than life and made sure that the media, everywhere she went, knew of her ‘oddities’ such as traveling wit a tiger or sleeping in coffins. These things got her attention and attention meant curiosity, and curiosity meant ticket sales to the shows she was performing.  But odd as it seems, Sarah’s art of acting was based on a style that today we would dismiss as wooden with huge gestures and, as was the style of the time, required very specific poses to suggest very specific moods and reactions.

Most of today’s actors are familiar with, and generally study a style of acting known as the Stanislavski Method (or just “The Method” as in “Method” acting).  Stanislavski developed that style from watching Eleonora Duse. Duse, a fair bit younger than Bernhardt, ‘felt’ her characters and became the characters rather than just displaying canned poses.

While it might seem strange to us today, Sarah’s style of acting was considered most appropriate, while Eleonora’s was shocking and disturbing to many. But Eleonora had her supporters (including theatre reviews such as Oscar Wilde) and the two great actresses would clash many times, including a time in France when they would appear in the same role, in the same play, in theatres across the street from one another.

This really was an engrossing, fascinating read. Rader captures a really pivotal time in the theatre world, commanded by two women – one largely forgotten despite the fact that it was her style that we still see today.

Although it might seem like this has a very specific interest (acting) I strongly recommend this to anyone interested in biographies or history as Rader really captures a lot about this time period (mid-to-late 1800’s to the early 1920’s).

This had me wanting to learn more about both women and I’ve watched the very few YouTube videos of their few movies.

Looking for a good book? Playing to the Gods by Peter Rader is a tremendous biography of two actors whose styles clashed as one method of acting was on the way out and another was just coming into fashion. But this is more than a book about acting and two famous actresses, it’s also a book about the struggle and rise of two women in an era when women weren’t allowed to take leadership roles.

The book is nicely illustrated with photos.

Playing to the Gods: Sarah Bernhardt, Eleonora Duse, and the Rivalry That Changed Acting Forever