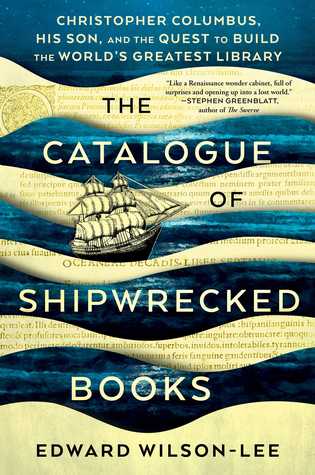 Hernando Colón had a passion for books and a vision for an organized library. Hernando Colón was also Christopher Columbus’s illegitimate son.

Author/researcher Edward Wilson-Lee does a tremendous, detailed job of tracking down this story and getting in-depth on Hernando’s story.

While the name Christopher Columbus is known by every American school child, we know so little about him (other than what every fourth-grader learns in our white-washed history books), so just learning about this child sets us up for a number of fascinating insights.

While Hernando is an illegitimate child, Columbus still took him along on his fourth voyage to the New World (Hernando would have been thirteen at the time).  This could well have been the spark that led Colón to a life of pursuing knowledge. He searched for books, in all languages, and he collected maps and art portfolios, searching through small booksellers’ collections on his varied trips.  This led to his organization a catalog of his books – a way for him to determine whether or not a particular volume or work of art was already in his collection.  It was because of this new method of cataloging that when a shipwreck occurred and Colón lost thousands of books at sea, he knew which ones needed to be replaced. And it was because of his vast collection of maps, as well as his familiarity with his father’s travels, that Colón was asked to step in to create a map – the final, authoritative map – of the New World so that Portugal and Spain could once and for all settle on territorial rights.

But it was at this time that Hernando was also quite familiar with his father’s fall from grace and standing – how Spain tried to take his discovery away from him – to honor other explorers, which would also take away the inheritance of Columbus’s legitimate heirs.

This book is amazing.  I think I learned more history and more sociology and more library science through this one book than I have in a very long time.

In many respects, the book has more history/biography about Columbus than I was hoping for. It was definitely a great lesson in history – I’d had no idea that Columbus lost so much favor – but what attracted me to the book was the idea of the development of the early library. These moments in the book … the revelation of Colón’s passion for books and his search to constantly improve his library … were not only the reason I started this, but the best moments of the book.

Looking for a good book? If you like history, if you like learning something very new about something very old, if the history of the printed word fascinates you, then The Catalogue of Shipwrecked Books by Edward Wilson-Lee is a book you really ought to read.

The Catalogue of Shipwrecked Books: Christopher Columbus, His Son, and the Quest to Build the World’s Greatest Library