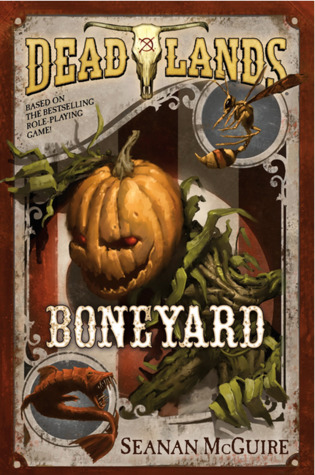 It is not a secret that I am a tremendous fan of Seanan McGuire’s work.  I think she’s the best urban fantasy and urban horror writer actively working today (under both her name and her pen name Mira Grant).  And so, of course, when I see I McGuire/Grant novel available for review I eagerly request it.

Deadlands: Boneyard is a media tie-in book. This is the third book in a series and it is based on a role-playing game (RPG) series.  While I am a self-professed gamer, I stick primarily to board and card games.  My RPG experience sticks pretty much to the first and second editions of Dungeons & Dragons. The basic premise of Deadlands is that it is a steampunk American western with a horror bent, which is appealing to me.

Annie Pearl travels with a circus.  She is in charge of the freaks and the monsters that run amok and terrorize the citizens of the communities in which the circus performs. Annie is mother to Abigail, a mute girl.

The circus is heading for a place in Oregon known as The Clearing, where the word is that a circus can make good money.  But The Clearing holds a secret and Annie will need to step up to save her daughter and the circus.

Of all the McGuire/Grant books that I’ve read in the past few years, this is one of my least favorites. I thought about this along the way and I think it’s mostly because this isn’t her own world. As much as she created something unique for herself, this is someone else’s world in which McGuire is playing.

Horror is hard to sustain in a novel and we never quite get a full sense of horror or a strong motivation to stay invested in the story.  Still, it’s a McGuire book, and that counts for something.

Looking for a good book? Boneyard by Seanan McGuire is part of the Deadlands series of books, based on a role-playing game and doesn’t have the typical McGuire flair and thrills, but fans of the game, looking for a read will likely enjoy this.