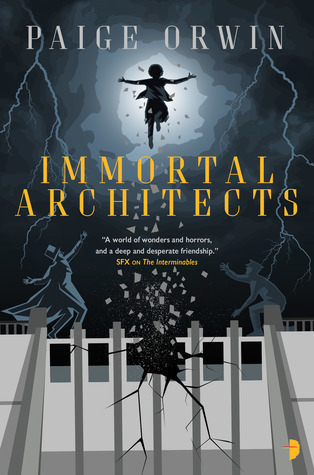 This follow-up to author Paige Orwin’s The Interminables, features the same tremendous characters with a wild, inventive plot and takes us on another tremendous journey.

Edmund Templeton is a sorcerer. One of the best. He is also known as “The Time Thief” because of his magic ability to take time from one person and use it for himself. Edmund, along with a ghost from World War I, Istvan Czernin, are trying to find a ‘normal’ way to live after settling the events from the previous book. But they are asked to help uncover (and stop) a living storm in central United States.  They discover a teen who appears to be a conduit for energy that he maybe doesn’t quite know how to use or manage.  But how do you try to help control a teen how can harness the power of a violent storm? Of course there’s a whole lot more going on than a teen with powers, and in the process of the discovery we meet more mages – these from the central part of the country.

Paige Orwin does a really nice job at giving us a fantasy world that feels real.  She finds a nice balance between explaining the magic while not getting caught up in it. She isn’t trying to impress the reader with ‘how cool’ the magic is or how clever she is, but instead makes it a simple, natural part of her world. This is surprisingly refreshing. ‘Surprisingly’ because more books of this nature should be like this, but unfortunately aren’t.

Orwin also gives us really great characters.  Reluctant heroes are pretty common in literature but Edmund is understated as a reluctant hero. He plays his role, even if he isn’t too terribly excited about it, but his character still has charisma and energy (very necessary to keep the reader engaged).

I did find this book to be just a little bit slow, but I would still recommend it and am definitely interested in more stories from the Interminables series.

Looking for a good book? Immortal Architects by Paige Orwin is a very original fantasy with strong characters and a tremendous world-building.