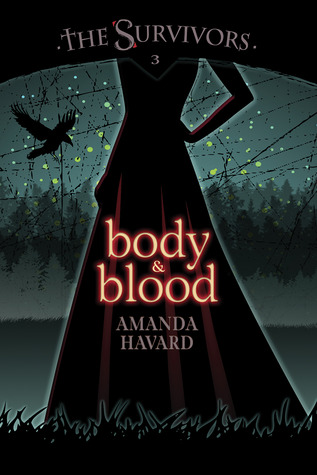 I really struggled with this book.

How many answers you seek are just a part of you, waiting to be found?

The game has changed.

Fresh from her first brush with mortality, a fragile Sadie Matthau is playing human with Cole Hardwick while the Survivors endure unimaginable tragedy. Wrought with the first deaths of their own kind, a tyrant who will torture them, and an opponent more terrifying than anyone could have foreseen, the Survivors are facing their end.

Told from three points of view, The Survivors: Body & Blood is a bloodcurdling, mind-bending, heart-stopping ride. As Sadie and the Winters uncover more enemies, more history, and more answers, they find themselves brought closer together and ripped further apart. And all the while, a haunting Alexander Raven lurks at the edge of Sadie s lifeline, at the darkening fringes of her mind.

As the Survivors descend into chaos, Sadie realizes a painful truth: the deepest of secrets leave the darkest of marks.

Caught between a terrifying fantasy and her own grim reality, Body & Blood is the story of Sadie s dance with her demons, future, past, and present.

Lots of exciting adjectives and adverbs (this reads like a film trailer), but nothing that really describes anything to a prospective new reader.  Who are “the Survivors” mentioned in the description and series title? “Fresh from her first brush with mortality” and “playing human” … clearly there’s something paranormal or other-worldly here, but what?  Is the answer in the book?  Yes… but not too early. So those of us who have not read the other volumes, aren’t clued in very well.

I felt like the book was mostly talk.  The characters stood around and talked to one another – about plans, about what they would do, about how to solve their problems. Then something might happen, and they’d stand around and talk some more. This was one of the driest fantasies I’ve read in a long time. It was definitely NOT the bloodcurdling, mind-bending, heart-stopping ride I was hoping for.

Looking for a good book? Body & Blood by Amanda Havard might appeal if you’ve read the first two books in the series … and then again, it might not.