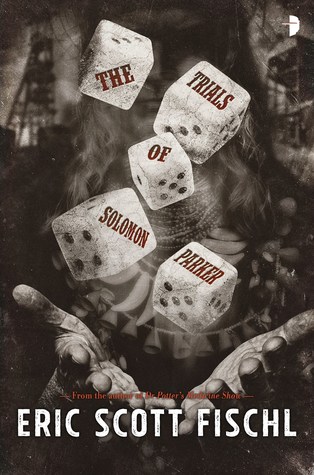 Once in a while you come across a book that you can tell you should like – it’s well written, it touches subjects that appeal to you, characters that are strong – but for whatever reason you just can’t connect with it.  The Trials of Solomon Parker by Eric Scott Fischl is just such a book for me.

We’re in 1916 Butte, Montana. Solomon Parker is a broken-down old man who has always managed to stay a step ahead of his debts, but time is running out as his debts to some pretty nasty people are increasing. But … deus ex machina … the “Above Ones” – the gods of The People, in the form of a man known as Marked Face – are looking for a little excitement and offer Solomon a chance to gamble his way out of debt.

There is a fair amount of Native American back story that takes place here, and I do enjoy Native American history (and literature), but it’s clear in the writing that this isn’t tribe specific and Fischl tells us in his notes at the end that this was done on purpose – to give us the touch of Native American sensibility without giving us a tribe to relate to.  I understand and appreciate Fischl’s sentiment that he’s not Native and these aren’t his stories to tell, but combining Native stories and making them into one ‘generic’ Native tribe isn’t ‘not telling’ a Native story. None the less, it was actually my favorite part of the story.

There is a scene early in the book which I highlighted and wrote “What is the point of this vile bit?” Suffice it to say that it’s a moment with a couple of guys talking crudely about the things a woman could do with her private parts. I saw no purpose for this at the time and still don’t feel it was necessary.

But overall I never connected with this book.  I didn’t care enough about Solomon Parker to care whatever happened to him. And since the story revolves around Parker, if he doesn’t connect with the reader, then it just isn’t going to work.

The Native American aspects to the story kept me interested, but it wasn’t strong enough to make up for what I was missing with Parker.

Looking for a good book? The Trials of Solomon Parker by Eric Scott Fiscl is a unique fantasy set in the American west in the early 20th century, but the main character doesn’t hold interest.

The Trials of Solomon Parker