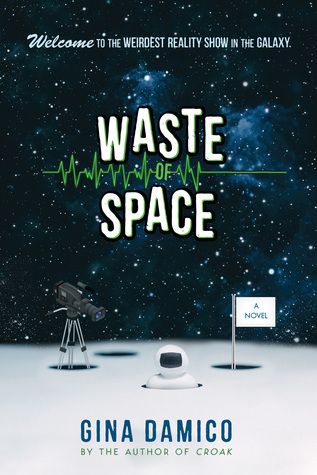 Waste of Space by Gina Damico is a very clever idea, written in an interesting (appropriate for the subject matter) style, but still mostly a long, drawn-out story that doesn’t have the payoff for sticking with the book.

Some not quite top-of-the-line Hollywood producers are looking for the next great reality show and team up with some not quite top-of-the-line scientists at the organization NASAW to produce the first reality show in space. Auditions are held and the typical assortment of teens are lined up (including one who doesn’t speak English and thinks she’s been kidnapped).  The Hollywood producers have a plan, however, to not actually send anyone into space, but need the NASAW team to make it look like it. The NASAW team feels as duped as the teens will be.

The ratings are out of this world and very few watchers (or participants) seem to notice that the space ship is made with wood, or question that there is still gravity and that there’s a hot tub on the ship. The only one who does seem smart enough to question it is the one who doesn’t speak English.

But just as the nation seems enthralled and the ratings are at the top, NASAQ pulls the plug … literally … and no one seems to know where the set – or the kids – are, leaving the producers to scramble to try to come up with an explanation.

The concept here doesn’t seem too far off. I’d heard talk of hopes to do a reality show on the moon, but of course rumors in the entertainment industry are nothing new. And that’s precisely what this book plays with.

The set-up of coming up with the concept and bringing the science guys (NASAW) into the story, and the auditions to find the right teens to send off on a spaceship, is a lot of fun. It’s fast-paced and the sort of exciting where you want to rub your hands together and chuckle because you just know something delicious is about to happen.

But then it doesn’t.

Author Gina Damico tries to keep it moving along by giving us plot twists at every turn, but we don’t need plot twists! The story is fun and frightening and so much better than a reality show, that we are simple let down when this becomes ordinary. And that is what happens.  It becomes a YA relationship/mystery novel instead of something really kind of different.

The idea of writing the book as if it was found material and adapted for the book (mostly transcripts of video recordings – both private and part of the reality show film (aired and un-aired)) is clever and quite appropriate , but at 500+ pages, a little long to sustain this style of story-telling.

Maybe this was too much like a reality tv (or “unscripted dramas” – as one producer has referred to them) show … I’ve never enjoyed those. Perhaps this is truly a generational thing – for those who’ve grown up with reality show after reality show and fame simply for having a camera follow you around, perhaps this hit the spot.  For those of us of a different generation, we know that story-telling can be so much more.

Looking for a good book? Waste of Space by Gina Damico is a YA story – bringing ‘reality tv’ to the page in a great concept that doesn’t quite survive the story … a lot like actual reality tv.