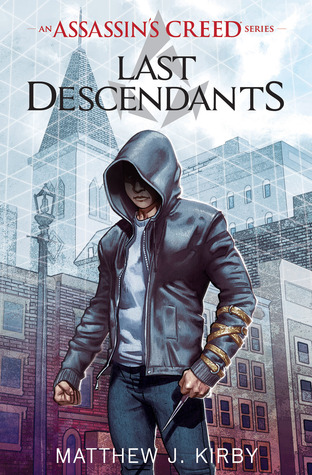 I just reviewed another Matthew J. Kirby book not too long ago and enjoyed it, wrapping up that I looked forward to another one of this books.  I picked this book out of my ARC pile and noted that it was also by Kirby. How fortuitous!

But whether it’s because this book is following the rules of a specific franchise or for some other reason, this particular book doesn’t have quite the same appeal as the other Kirby book I read recently.

I should also note that I’ve never actually played the Assassin’s Creed video game, though I’ve watched my son as he’s played through it.

Owen is a fifteen year old and his father has been sentenced to death. Owen wants desperately to prove his father’s innocence. He wants to use the ‘Animus’ (a means of accessing an ancestor’s memories) to get the proof that he needs, but once he does he becomes a target for a number of secret organizations, and Owen learns about the secret societies, the Templars, and the Assassin’s Brotherhood. Getting caught up in the affairs of the secret societies and the Animus, Owen and his friends (you know … that appropriately, racially and gender-mixed group of teens) wind up back in 1863 in search of a special dagger to make sure that it doesn’t fall into the wrong hands.

One of the nice aspects to this book is the tie-in of the fictional world to real historical events.  Of course, being a book for youngsters, this history tie-in gives it that modern educational aspect that kids books tend to have.  Still, it is a great way to drop in a lesson without the reader realizing that they’re learning something.

But on the whole, I found this book to be a bit boring, which surprises me.  Being a book by Matthew Kirby and being a part of a very exciting, aggressive series like Assassin’s Creed I expected a lot more action and definitely more excitement.  (However, I was wondering how they were going to make teens into assassins.) I realize that there is a need to set up the characters and the situation because not everyone knows the video game series (me, being one of them), but I’m not convinced that this succeeds at really addressing all this.  Instead it becomes a collected bore that manages to hold true to the franchise and not offend anyone and be readable by school-aged children.

I feel like this is too often the case with children’s books that are based on something that comes from another medium (film, tv, video games, etc) – too many rules to follow and the rights holders don’t want to offend anyone so everything has to be sterile.

The character don’t stand out and they fit a stereotype grouping. We have to make sure there’s one of every kind (gender, race, and even sexual identity.  This has become so common that we expect it.

I didn’t really learn anything new about the Assassin’s Creed universe and I wasn’t particularly entertained.  This one is the sort of book that catches a youngster’s interest because of the video game, but it’s a story that will quickly be forgotten by those who manage to read it.

Looking for a good book? Last Descendants by Matthew J. Kirby takes place in the Assassin’s Creed universe … not that it really matters.