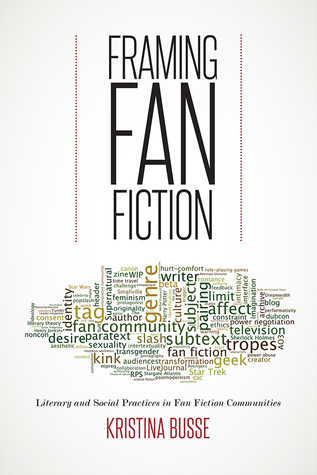 First, let’s start with the writing itself.  It is pretty clear, to me at least, that this was written as a thesis. That doesn’t necessarily make it ‘bad’ but in this case the presentation is incredibly dry and dispassionate. It is a critical look without any apparent desire … which is strange because author Kristina Busse mentions being a part of fandom. You would never guess by the writing here.  I attribute this to professors who want to see this sort of not-involved/observer writer.

We also get that classic school writing that has Busse starting each chapter telling us what we’re about to read and then a conclusion telling us what we just read. And rather than footnotes or end notes we get a constant array of parentheses citing sources throughout the book.

I’ve read books like this before and without being an academic myself I’ve just never found this sort of writing particularly interesting.

The subtitle of this book is “Literary and Social Practices in Fan Fiction Communities.” Okay, aside from sounding like a thesis paper, this is quite interesting to me. This is part of the reason I requested to read this book. Fan fiction and fandom can create a real community and I was curious how Busse would report on the social aspects, as well as the writing, of these fan communities.

The book is sectioned into three parts.  The first part is titled “Slash as Indentifactory Practices.” For those who aren’t familiar with the term, according to Wikipedia: “Slash fiction is a genre of fan fiction that focuses on interpersonal attraction and sexual relationships between fictional characters of the same sex.”

The second section is titled “Canon, Context, and Consensus” which only touches on sex in the third of the three essays.

Part three is “Community and Its Discontents” which doesn’t sound like it would discuss erotica, but the three essays are: “My life is a WIP on my LJ: Slashing the Slasher and the Reality of Celebrity and Internet Performances”; “Geek Hierarchies, Boundary Policing, and the Gendering of the Good Fan”; and “Fictional Consents and the Ethical Enjoyment of the Dark Desires”.

I’m not opposed to a research book on the eros in fan fiction, but I sure would like to know that’s what I’m about to read.

I will say that it’s clear Busse is quite knowledgeable on the subject and has done a tremendous amount of research here and I’d like to see her write something that isn’t meant to be graded.

Unfortunately, this book just didn’t work on too many different levels.

Looking for a good book? Unless you’re looking for a potential classroom textbook, Framing Fan Fiction by Kristina Busse is probably not going to hold much interest for the casual reader (or fan).