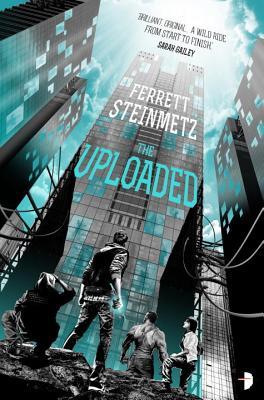 I had read Ferrett Steinmetz’s ‘Mancer’ series and despite rave reviews by so many, I could never quite see what the fuss was all about.  Reading the slug line for this book I thought the concept sounded really interesting so I thought I’d give Steinmetz another go.

The concept: In the not-too-distant future, as more and more people are connected on-line someone has created a virtual heaven so  popular that people are dying to get in.  Literally.  To access this digital heaven, known as the Upterlife, the synapses of one’s brain are uploaded and the physical body dies. This was great for the elderly whose bodies were about to wear out anyway.

But the dead, now with nothing but time to think and communicate, don’t think too highly of the living.  In fact, the living have become slaves to the dead – maintaining and upgrading the servers that host the dead network. The dead also begin a bit of snobbery, deciding which living person is worthy of being uploaded to the Upterlife and which ones are banished to an everlasting death.

One young boy, Amichai, rebels against the certain future of serving the dead for himself and his sister, and during the course of his rebellion he discovers that he is not alone in wanting a better life.

I really, really like the idea here. Steinmetz has a great knack for high sci-fi concepts.  That this doesn’t steer away from any sort of potential religious controversy is definitely in its favor. But a good sci-fi novel needs so much more than a great concept. It also needs characters and motivation and heart.

The first couple of chapters opened up so nicely and I thought to myself – ah, I think I will enjoy a Ferrett Steinmetz novel! But the further I got into it the less I cared. The concept became richer and clearer and I was really enjoying it, but the characters never became any more full or interesting than they were in the first couple of chapters. Because of this, the book just became a strange combination of great concept/uninteresting characters. So while I wanted to read on to understand what was happening, I also just wanted the book to be over because the people who inhabited this world were so very uninteresting.

Looking for a good book? The Uploaded by Ferrett Steinmetz shows that the author is wonderful at giving the reader unusual and tremendous science fiction ideas but the characters and the worlds he builds don’t quite live up to the concepts.