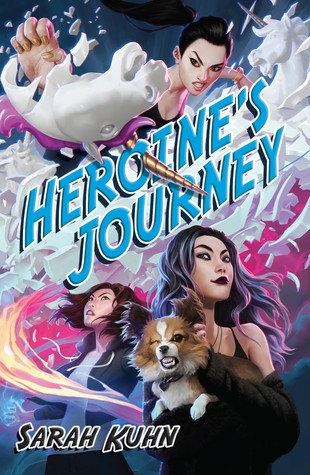 With this book I have now read the Heroine’s Complex trilogy. I’ve had real mixed feelings about the previous two books (you can search for my reviews on my blog) but I am so happy to note that this is the strongest book of the series (and it will be a continuing series, according to Ms. Kuhn).

Bea Tanaka is the little sister to Evie Tanaka, the sometimes partner, sometimes sidekick to superhero Aveda Jupiter. Bea is just beginning to discover that she might have superhero powers of her own – the ability to plant suggestions in other people’s minds (think Jedi mind tricks). And along with these powers are visions of her and Evie’s mother who has been presumed dead for some time.

Bea wants desperately to join forces with her sister and Aveda and become a member of the superhero team to help stave off the demons from the portal that is sometimes open over San Francisco. But Aveda and Evie can’t see Bea as anything more than Evie’s little sister – one who needs protecting rather than as a protector. On her own then, Bea follows her mother into the portal and the realm of the demons where she hopes she can help her mother return to San Francisco.

One of the things I liked so much about this book was the plotting.  We have here a well-thought-out story: device, contrivance, character, motivation, conflict, sub-plots, surprise, resolution.  I didn’t feel that way about the previous book, which felt more like a character story with the plot being secondary.

I really liked getting to know more about demon portal. This being the prime source of conflict for the series it was nice to have it come into play in a big way.  Bea’s description of the portal to Evie and Aveda is so concise and easy to understand that I smiled and noted in my kindle “brilliant.”

It’s great to finish the trilogy on an up note and definitely makes one want to continue reading the series.

Looking for a good book? Heroine’s Journey by Sarah Kuhn concludes the Heroine’s Complex trilogy with a strong story and characters that will make you believe in superheroes in San Francisco.