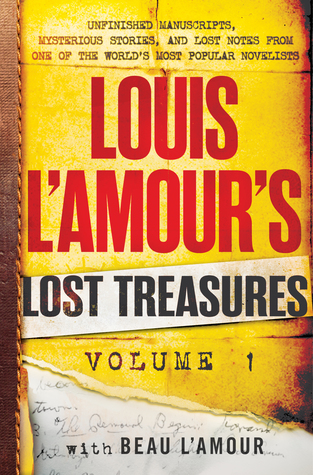 I was trying to find a way to describe my relationship with the works of Louis L’Amour. At one point in my life I believe I owned a copy of everything L’Amour had published. But owning and reading are two very different things.

I have not read everything Louis L’Amour has written.  In fact I’ve read very little, given his body work, but I I’ve liked everything I’ve read. It often comes down to the genre as much as anything else.  I like western fiction and when I’m in the mood for a western I’m most likely to pick up a L’Amour novel.  But I’m not a western fan – constantly reading westerns – but I am a fan of good story-telling, and Louis L’Amour is a good storyteller.

Since Louis L’Amour’s death in 1988, Beau L’Amour, Louis’ son, has been the overseer of the estate.  And like almost every writer I’ve ever known, Louis left an awful lot of unfinished manuscripts. Beau has sorted through pile of manuscripts and shares with us.

This is a fascinating look at the process of an established author.  We have here sometimes a few chapters of a novel, sometimes the treatment for a screenplay, sometimes a chapter followed by notes on where the story would go or notes with questions about a character and his motivation. And in a t least one instance we have multiple starts to a story.

I don’t know that I have a favorite … how can you have a favorite when it’s a collection of unfinished work? But I think “Trail of Tears: The First Seven Chapters of a Historical Novel” is among the most interesting. Aside from being the most complete work included here, Beau L’Amour notes that this was one of Louis’ attempts to break out of being labelled as a ‘western’ writer. It also includes a breakdown of all the major plot points of the book which ends with the note to himself: “Begin writing tomorrow and do 1,000 words of the beginning. Do them over. Begin with action, poetry, power. Create a character worth reading about.”

Also of great interest is “Samsara: Three Beginnings for an Adventure Novel, and a Treatment” because it gives us a look at how a story changed as L’Amour rewrote it. Though Beau does comment (on a different story included here):

There were so many rewrites that I could see the storytelling begin to deteriorate; even as he got certain aspects of the plot nailed down, he began to take others so much for granted that he glossed over them, probably because he knew them too well by then. Louis did not like rewriting for this exact reason — unless a writer truly enjoys revision (and he did not), too many drafts can suck the life out of a story before it ever gets going.

Reading all the stories that weren’t westerns here, I wondered why neither he nor his publisher never had L’Amour use a pseudonym. Certainly the name L’Amour was bankable, but clearly the man was a talented writer and his adventure novels or historical fiction might have done very well under another name (think Stephen King and his work as Richard Bachman).

All in all, this was a wonderful read and every budding writer should look at this as a textbook on the writing process, and fans of L’Amour will rightfully look at this as the treasures the title suggests.

Looking for a good book? Louis L’Amour’s Lost Treasures Volume 1 is a wonderful collection of unfinished stories and novels by one of the great storytellers of our time.

Louis L’Amour’s Lost Treasures: Volume 1: Unfinished Manuscripts, Mysterious Stories, and Lost Notes from One of the World’s Most Popular Novelists