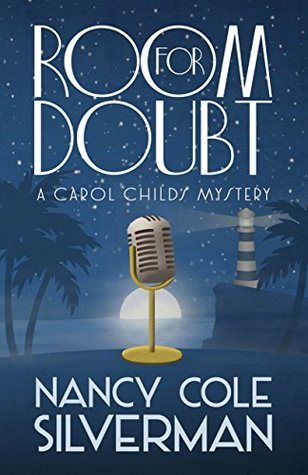 Room for Doubt is the fourth book in the Carol Childs Mystery series by Nancy Cole Silverman.  This is a series that started off a little rough for me but has gotten better with each book and holds true to that here with number four.

Carol Childs is a radio reporter in Los Angeles and when she’s called to a death on the Hollywood sign in the early morning hours. She thinks, at first, that it must be a movie stunt – a body hanging from the Hollywood sign seems to obvious. But she notices that the police and coroner are handing it as a body and she knows that something here is amiss. But the police rule it a suicide very quickly and something about it doesn’t sit right with Carol.  Just a quick inspection of the area around the hillside shows signs that someone recently left the area through a hole in the fence, and the strange find of a red rubber clown nose with the body doesn’t make any sense.

While on the air later, Carol receives a call from a woman identifying herself only as “Mustang Sally” who claims to have killed the man on the Hollywood sign the night before.  Thus Carol begins a journey seeking the truth, and justice for the victims, that will surprise her and have her rethinking what ‘justice’ actually means.

I really enjoyed the mystery in this book and I often enjoy stories where things aren’t black & white – where they aren’t clear-cut – and that’s definitely the case here. Everything about this story was really splendid and revealed nicely through the course of the book.  At the end of Chapter 11 I made a note in my Kindle: “Nicely written scene…so much here…great job showing, not telling.” This chapter spoke volumes.

This book is definitely worth reading!

I had two little moments that made me pause and think about what I had just read – moments that took me out of the story.  In the first, Carol consults with “Dr. Sam, the station’s resident GP who specializes in geriatrics.”  Doesn’t ‘GP’ stand for ‘general practitioner’?  And isn’t a general practitioner someone who, by their very title, does not specialize?  I looked it up to be sure, but that’s what I find.

The other instance may be more of a regional idiom but at one point a character refers to going old school and carrying a ‘beeper.’  I knew immediately what it was but I had to stop and think about the term as I was used to calling it a ‘pager’ and not a ‘beeper.’

Even so, a recommended read.

Looking for a good book? Room for Doubt by Nancy Cole Silverman is the fourth book in the Carol Childs Mystery series and it has some teeth to it – a strong story with an intense mystery.