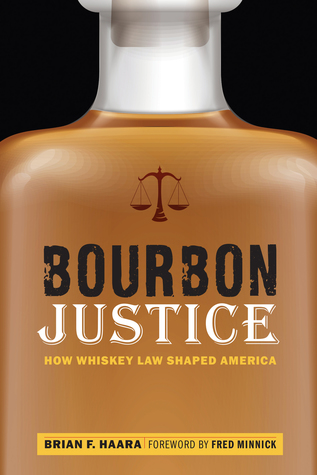 Although I’ve been drinking bourbon for a few decades (as the primary alcohol in my Manhattans) I admit to knowing very little about it other than I prefer bourbon to most other whiskeys. Brian F. Haara’s Bourbon Justice shares not just a little history of bourbon, but shows us how this distinctly American alcohol laid the foundation for many of our modern consumer protection laws.

Americans have always seemed to me to be rather litigious and so it seems quite appropriate that bourbon (one of the factors for the alcohol to be called a bourbon is that it has to be made in America) has set the stage for a number of American laws.

Right off the bat we learn that it took lawsuits and a decision by the President of the United States, to determine what constitutes a bourbon.  Then we embark on trademark and brand name decisions that still affect us today.

We learn about puffery (there’s a legal definition) and exaggeration and truth in labeling – something which is still an issue today and has often been a source of contention between various bourbon manufacturers. We even learn a little bit about bourbon and Prohibition.

What is presented here is really rather fascinating.  There were times when I couldn’t believe that someone had, perhaps, copied a label so much in order to trick a consumer into believing their inferior brand was actually a different, more expensive brand.  Or that a family couldn’t use their family name on a bottle because the rights had been sold generations earlier.

Yet with all that’s here, it doesn’t feel very complete.  Maybe this is it.  Maybe the ten chapters of this book really do make up all laws brought about by, for, and against bourbon manufacturers. Or maybe it’s at least all the important lawsuits.  But it just doesn’t feel that way.  I get the sense (and I can’t quite say why) that this just skims the surface.

Haara does a really fine job of presenting his information and the book is well researched.  Nearly a fifth of this slim book is made up of Acknowledgements, Notes, Table of Authorities (court case references), and an Index.

I did appreciate the “Tasting Notes” mixed in with the book, in which different bourbons are highlighted and detailed.  I will definitely refer to this in the future when I need to pick up another bottle.

The bottom line, however, for me, is that I don’t think I am any better informed when it comes to selecting my bourbons. Who actually manufactures my favorite drink, what it consists of, and where it comes from, can still be obfuscated enough, legally, that it would take some pretty intense research to know.  I guess I’ll keep going just based on my tastes.

Looking for a good book? Bourbon Justice by Brian F. Haara takes a detailed look at how the beginnings of bourbon in American also brought about early lawsuits, many of which are either still in place or at least set the bar for today’s consumer protection laws. It is an interesting read.