WHY THE MONSTER – Sean and Rachel Qitsualik-Tinsley 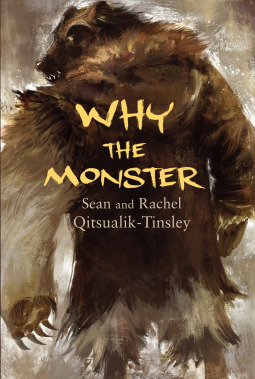 Why the Monster is an absolutely phenomenal book.

Sean and Rachel Qitsualik-Tinsley have written a book for young readers that captures the mythology or legend of the Inuit people and also understands the concerns and fears of a child – being preyed upon by bullies, being uncomfortable trying to live up to an adults expectations, being awkward or shy or in some other way not fitting in, being alone….

Huuq is an Inuit boy who feels like an outsider. He and his dog, Qipik, wander off, alone and come upon a strange egg. Breaking this egg sets off a series of events, frightening and well beyond Huuq’s control. Huuq, bit by bit, turns into a strange half-human, half-monstrous creature.

When the transformation first begins Huuq returns to his village to seek comfort with his family. On his way he runs into the bullies who torment him and he sees the opportunity to get back at them now that he’s changed but once he begins to frighten the villagers they no longer see Huuq, they only see a monster and they try to run him off and kill him.  It is only in his pleading eyes to his parents that they recognize him and they prevent the other villagers from killing him.  But Huuq knows that it would be impossible for him to ever live in the village again and so he regretfully leaves his family and everything he knows to wander the frozen wilderness.

During his wandering journey he looks for answers from the “Its” – the supernatural creatures that turned him into the monster he’s become.  He also discovers that being big, strong, and terrifying doesn’t make life any easier for him.

I am really so impressed at how beautifully the book captures the fears of a youngster (about middle school age) and while hyper-relevant to the Inuit people, this story easily resonates with any child with an open imagination. The concerns of children are pretty universal and addressing it with a community-identifiable mythology is absolutely brilliant.  It can only broaden the appreciation for the Inuit life and philosophy – which I think is a very good thing.

This is the second book I’ve read by Rachel and Sean Qitsualik-Tinsley and I’m so very impressed. I wish their books had been available when my children were younger, but how very fortunate this is available now!

Looking for a good book? Why the Monster by Sean and Rachel Qitsualik-Tinsley is a tremendous coming-of-age story set among the Inuit but with a deeply rooted story that will appeal to readers everywhere.