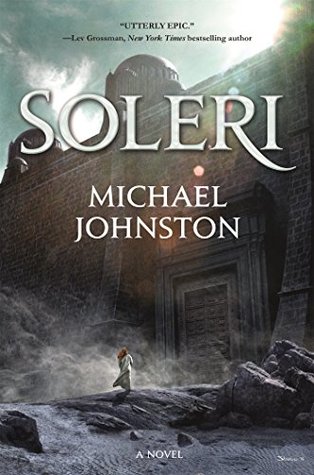 Soleri is an epic fantasy that captures a touch of ancient Egyptian mythology and mixes it with the high drama of a Shakespearean tragedy by Michael Johnston.

One family has ruled the Soleri Empire for longer than the calendars have been recording the history – nearly 3,000 years. No one has seen this family, described as descended from the gods, but their power over the four kingdoms of the empire is iron tight.

Each year there is an eclipse and the kingdoms are meant to pay tribute and honor their god-like leaders, but this particular year, Arko Hark-Wadi – king of Harkana – does what he wants to do, which is go on a hunt. There is strife in his family as his daughters look to buck the long-standing traditions and marry the men they want to marry, and Arko Hark-Wadi’s son Ren is held prisoner in the capital city.

Elsewhere, Sarra Amunet, he Mother Priestess of one of the gods’ religions, holds some secrets that could destroy not only her family, but end the long reign of the empire if she’s strong enough to reveal them.

There is a LOT here in this book. 368 pages feels like twice that, given the intricacies of the relationships and the world.

There were moments when I was completely engrossed in the characters and the developing story – particularly the beginning and the end (which is great since it captures our attention and it sends us off on a strong note) – but there were just as many times (throughout the middle) when I felt the story was repetitive and monotonous – making the 300+ plus number of pages feel twice as long, but not in a good way.

The opening chapters really had me hooked on Ren’s story and anytime we weren’t with him I really just wanted to get back to finding out what he was doing – which just wasn’t enough!

While I wasn’t overly thrilled with my reading of this book, I believe that there’s much more in here that I missed and this is one of the rare books that I will make sure to read again in hopes that I can pick up more of the intricacies of the story.

Looking for a good book?  Soleri by Michael Johnston is an epic fantasy, dense with character and story development that often feels much longer than it really is.