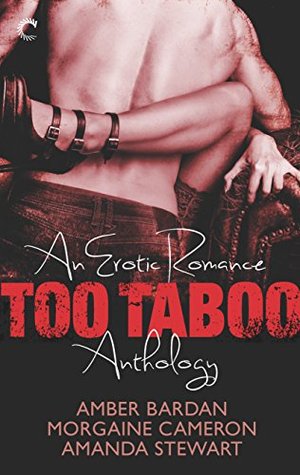 I don’t request these types of books very often, though I certainly could, judging by how many titles are available through my advance reading copy resources.  I pick them somewhat randomly and fully admit that I don’t really have a very good handle on what I will be getting until I start reading.  Too Taboo sounded interesting since it didn’t seem to me that there were many things that were considered taboo in this genre.  And with three longer stories included, I figured it was a good way to get some variety.

The first story, “Absolve Me” by Morgaine Cameron, was quite interesting and well written.  Here a sex therapist who works as a sexual surrogate accepts a new client from a fellow therapist.  She isn’t told too much about him except that he’s struggling with sex and sexuality. She takes him through a session, gaining more fulfillment and enjoyment herself than she allows herself for work, to discover that his issue stems from his being a priest. He’s trying to decide if giving up sex for the priesthood is the right thing for him.  Shocking!  But it doesn’t stop her from continuing her education for him.  In fact she brings out some strong fantasies of his, which include strong dominating of his partner.

But suddenly he stops and though she’d fallen quite madly in love with him, she realizes he must have decided to commit to the priesthood.  When her fellow therapist recommends another client, she doesn’t want to take anyone on, but the friend insists and when the new client appears … ta da! … it’s the priest, who is willing to give up the priesthood and serve his god in other ways, because the sexual bond (pun intended) between them was so great!

“Twice as Hard” by Amber Bardan throws a lot of curve balls at the reader and we’re never quite sure where the story is going until the end … and even then …?

I don’t want to give too much away for those who might actually want to read the story (the stories are available from the publisher separately as well as in this anthology), though this was my least favorite of the trio.  Suffice it to say that a woman is dominated by two men.

Domination … ah … I see the recurring theme.  But domination doesn’t seem ‘taboo’ any more.  It’s become rather prevalent, though I suppose it’s still not considered completely acceptable even among consenting adults.

Although the language in “Absolve Me” is graphic and blunt, it somehow seemed harsher and more jarring in “Twice as Hard.”

The final selection is “Seduction Squad: Captured” by Amanda Stewart.  This story seemed the most laughable (yes, more than the seduction of a priest) as a female spy who has been captured is being interrogated by the hunky enemy officer.  She’s known to be a part of the ‘seduction squad’ – a team of women well-known for their sexual prowess and ability to turn the strongest man’s legs to jelly by finding his deepest most secret fantasy and toying with him.  But she’s been captured, surely she can’t use her wiles against a big, strong man … right?