THE BROKEN ONES – Danielle L. Jensen 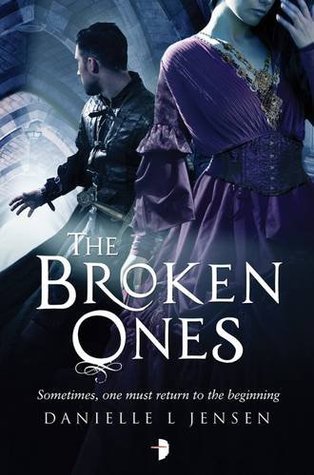 I had only just finished the initial trilogy (The Malediction Trilogy) by Danielle L. Jensen when I began this book, a prequel. It was definitely nice to have some of these characters very fresh in my mind as I went in to this.

I wasn’t entirely enamored of the trilogy. I thought that the first book was a great YA book with a lot of promise, but the series then seemed to change direction and it was less of a YA ‘forbidden’ romance as it was a political fantasy with a touch of romance. What The Broken Ones does is nicely set up the ultimate direction of the trilogy. Looking back on the trilogy, I can definitely see where this would have been very nice to have read before going in to the trilogy.

This prequel does not follow Tristan of Trollus and Cecile, though Tristan is in the book.  Instead, because this is more of a political romance, we follow Marc, who is the right-hand to the leader of Trollus, but he is also a leading informant to those who want to overthrow the current regime. Marc’s girlfriend is Penelope, a daughter to the Duke of Angouleme. We did (or we will) learn a little about both of them in parts of the trilogy, but this is really their story and how they fit into the other books.

Just as the other books are told from different viewpoints – Tristan and Cecile – this book is told from both Marc’s perspective and from Penelope’s. Their roles, we come to learn here, are much more important – incredibly major- compared to the almost footnote feel they had (will have) in the trilogy.

And I liked them more.  Cecile, who started out strong and became a bit simpering toward the end, became much less interesting, whereas Penelope is a strong female character whose role in a major political conspiracy is truly fascinating. And yet she never loses her sense of love and passion for Marc as well.

The political intrigue works really well here, but so does the romance.  I’d be much more interested in reading more about these two if there was more to tell.

Looking for a good book? The Broken Ones by Danielle L. Jensen is a prequel to her popular Malediction Trilogy, but this book succeeds where the end of the trilogy let the reader down.