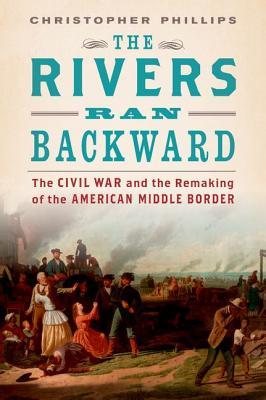 Christopher Phillips’ nearly 500 page exploration of the American Civil War and the effect it had on the people and communities of the states in the middle of the conflict is an exhausting, but informative read.

Phillips has done a remarkable amount of research (note that nearly one-third of the book is made of ‘Notes’ ‘Bibliography’ and ‘Index’) and lays it out for the reader in eight chapters. They are:

1. White Flows the River: Freedom and Unfreedom in the Early National West
2. Babel: Changed Persistence on Slavery’s Borderland
3. The Ten-Year War: Sectional Politics in a Dividing Region
4. No North—No South—No East—No West: The Fiction of the Wartime Middle Ground
5. Netherworld of War: Civilians, Soldiers, and the Dominion of War
6. Bitter Harvest: Emancipation and the Politics of Loyalty
7. Shadow Wars: The Crucible of Social Violence
8. Southern Cross, North Star: The Politics of Irreconciliation

I felt that the first three chapters were quite dense with information. My reading was slow and methodical and still I couldn’t quite take it all in. Typically when we are presented with a book on the Civil War we’re thinking about North/South and the soldiers or the locations where battles were key.  But this book has us looking at a completely different aspect of the Civil War – the reactions of citizens in outlying states (Midwest and West); the social and political turmoil caused by the war in communities not directly, physically part of the war, as well as those caught in the middle – battle ground states may have acted as staging areas, but not everyone in those locales took part in the battles.  But just as with nearly any political action, neighbor often disagreed with one another, and not everyone in a northern state agreed with the emancipation of the slaves, just as not everyone in a southern state agreed to the right of keeping slaves.

The fourth chapter was particularly interesting to me. It hadn’t occurred to me that there may be fiction available “of the Wartime Middle Ground.” I’ve taken notes and have a few works to look for.  In particular, I’m interested in reading some Annie Fellows Johnston. Some of her works are “set in an idyllic and fictional Bluegrass town” that “used war and Lost Cause regional stereotypes to confirm northern readers’ sectionalized conceptions of Kentucky as a Confederate state while appealing to southern readers with gauzy images of the region’s benign antebellum slaveholding past.”

War is a work of politics and politicians and Phillips lays that out for us, and it’s hard not to read through this and see some parallels in today’s politics – which is frightening.

While I have an interest in history in general and Civil War history in particular, I don’t tend to read a lot of history books.  The bulk of my non-fiction reading is biographies, entertainment/theatre, and nature related works and not academic works too often.  For me, this was a very difficult book to read and only partly because of the material itself (I find it difficult to read about strife and politics).  It’s just so… academic.  I.e: Dry.

I thought about this, knowing I would soon have to write my review, as I began the conclusion.  The opening paragraph reads:

The antagonisms that remade the former middle border region were not the
result alone of semicentennial commemorations of the Civil War. A half-century
of politics—formally at the national and state levels and informally as innumerable,
personalized war experiences retold by countless civilians and soldiers on
both sides of the rivers—formed exclusivist cultural narratives of that bitterly
lived war.
In the region’s former slave states, white residents did more than distort a
quasi-Confederate past. Pushing past war boundaries, they articulated a southernized
narrative of their states to transcend the immediate celebration of a
Confederate heritage and achieve cultural identification with the Old South.
Commemoratively, they bridged the Confederate tradition to obscure their
loyal wartimes by accessing their slaveholding pasts and articulating the shared
experience between the antebellum and the postwar South. Deeply contested,
the halting construction of white southern identity buttressed their opposition
to the destruction of slavery, to freedpeople’s acquisition of citizenship rights,
and to all those who had accomplished the latter.

It makes complete sense, but I had to read through it twice to make sure I was really understanding what Phillips was saying here.  And reading paragraphs like this twice is a very slow process.

Looking for a good book? The Rivers Ran Backward by Christopher Phillips is a thorough look at a new angle of the American Civil War. For those interested in social and political (and war) history, this should be on your wish list but the academic presentation of the material may turn off the casual reader.

The Rivers Ran Backward: The Civil War on the Middle Border and the Making of American Regionalism