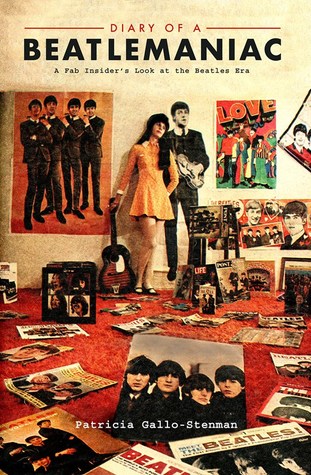 Fandom … of any sort, really … looks pretty much the same, no matter what the generation or what the object of a fan’s interest might be.

Patricia Gallo-Stenman, now an adult, spent her teenage years keeping a diary which chronicled her fanaticism for all things Beatles, as well as the typical teen-girl musings on subjects such as boys, school, and parents. Ms. Gallo-Stenman would go on to become a staff writer for a Philadelphia newspaper and, despite a teenager’s anxiety that it wouldn’t happen, a responsible adult and parent.

Gallo-Stenman (then simply Gallo) was a teen attending a Catholic high school where the strict nuns did not want to see anything Beatles in the school – even inside the lockers – and so the girls got pretty good at hiding their memorabilia.  Reading through the teenager’s complaints about nun strictness and enthusiasm for the lads from Liverpool, one can’t help but see the plight of teen girls everywhere – those who came before the Fab Four, and those fighting through adolescence today.

Where Gallo deviates, perhaps, from the ‘norm’ is her drive and push to find ways to get close to the Beatles, beyond becoming part of a mob of screaming girls outside a hotel or concert hall.  Though she and a friend or two are clever enough to hide out at the back entrance to said hotels and concert halls, it’s to no avail. But when she learns that Victor Spinetti (an actor who appeared with The Beatles in A Hard Day’s Night) is performing in a stage production in town, she meets with him after the show and a life-long friendship with the personable performer develops (and she becomes the head of his own fan club).  He provides her with insight and autographs of the lads when he works with them (on Help! and Magical Mystery Tour).

In addition to her diary writing, Gallo pens a column for teens for the local paper, going beyond just news about The Beatles but sharing tips about a lot of pop culture that teens could find interesting.

There were a few moments when I was almost embarrassed reading this personal reflection and I thought how brave Gallo is to put her younger self on display this way.  But again, although this book is billed and sold as an insider’s look at being a ‘Beatlemaniac’ it really does address the adolescent’s desire to find ones path – to see a world bigger and beyond the home.  It is interesting to read her slow discovery that maybe she and Paul McCartney never really will meet, date, and marry.  The young teen sees it as a hope, a dream, but the older teen begins to see that it was a dream that never would be.

As a book with a connection to the Beatles, it was definitely interesting.  As a book that examines teenage social interest and anxiety, it is tremendous. Together it is a really fun read with some nostalgia.

Looking for a good book? Diary of a Beatlemaniac by Patricia Gallo-Stenman is a wonderful read on a variety of levels: Beatles, sociology, history, memoir.

Diary of a Beatlemaniac: A Fab Insider’s Look at the Beatles Era