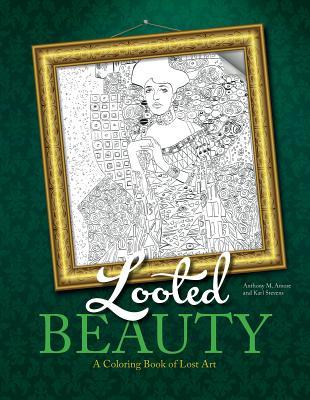 Like its counterpart, Stolen Beauty, which I reviewed back on March 19, 2018, this book has artist Karl Stevens recreating particular works of art in simple line art form, suitable (sort of) for coloring.

Anthony Amore has done some fine research and has collected the information on a number of works of art that was ‘looted’ (stolen) from various locations by the Nazis during World War II.  The Nazi looting because famous with the book and film  The Monuments Men.  Between the directive given in 1940 and 1944, nearly 1.5 million railway wagons of artwork and books were taken from Jewish possession by the Germans.  Some of the artwork has been returned to the rightful owners, some still missing, and some destroyed.

The fact that the artwork depicted here was taken in an attempt to erase an entire culture as part of an ethnic ‘cleansing’ makes this a little difficult to look at.  That some has been found and returned is heartening, but it still is hard to imagine destroying and entire history of a group of people in this fashion.  We’ve seen it happen again, more recently, with the group known as ISIS trying to destroy and erase a heritage.

Only a handful of artwork was selected for this book – about 30 pictures.  Karl Stevens, as mentioned above, does a really nice job of recreating the art in coloring book form.  We can see a difference – a specific style – for each different artist being represented. I knew when looking at a page that I was looking at a representation of a Van Gogh, a Paul Klee, a Vermeer, or a Degas for instance. Though I didn’t always know the artists being represented.

The difficult part of the artistic part of this book, of course, is that the originals weren’t intended to be simplified to coloring book status and colors and shades often blended in the paintings and Stevens has had to make some difficult choices on how to represent that, which sometimes might make a page a little more challenging to color.  I advise the budding artists to simply be creative and not worry too much about staying inside the lines.

As with the other book that I reviewed, I really like the whole concept here, as well as the execution of the project.  This is a worthwhile endeavor and brings great awareness to susceptibility of our art and our culture to those wanting to hurt either.

Looking for a good book? Looted Beauty is a tremendous coloring book by Anthony Amore and Karl Stevens. It is worth picking up just for the valuable lessons it brings to light, but is also very useful as a relaxing color book.