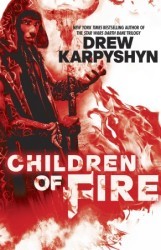 A long time ago, when the gods toyed with mankind as if they were simple chess pieces, one special warrior, Daemron, was selected by those gods to lead the charge against the Chaos spawn. But Daemron turns his power against the gods, which is never a good thing to do, and the gods banish him to a different realm and place a magical shield and protectors to make sure Daemron remains out of their way.  But that was a long time ago, and now that protection is weakening and Daemron is able to cast bits of his essence into the world. where it inhabits four children who will need to come together to either restore Daemron to power, or rebuild the protection against him.

This is pretty classic epic fantasy and there isn’t much here that would inspire a reader to say “Wow, that’s new and different!” In fact I often felt as though I had read this book before (though I haven’t).

The birth and early lives of the children was really interesting and well done. I was definitely caught up in their lives and upbringing (each very different from one another), and I really looked forward to following them as they got older, but the book wasn’t about these people (too bad) but about gods, magic, and destiny.

I would have preferred to stay with the four characters and had this be much more a story about them, but it was almost as if they became secondary to the over-arcing story, which made me enjoy this much less.  And of the four characters, one of them I was never sure was actually one of the inhabitors of Daemron’s magic.

There certainly was some excitement in the action sequences, and author Karpyshyn clearly had a good overview of where the story was going and managed to get there, even if it meant skipping years of the children’s lives. The story-telling held my interest well-enough that I enjoyed this book as a means to pass my time reading.  It did not, however, hold my interest enough that I want to hurry out and catch the next book in the series.  This is a one-and-done-time-to-move-on book.

Looking for a good book? Children of Fire by Drew Karpyshyn is an epic fantasy that satisfies the hunger for an epic fantasy, but it’s not terribly original and won’t have you begging for the next book in the series.