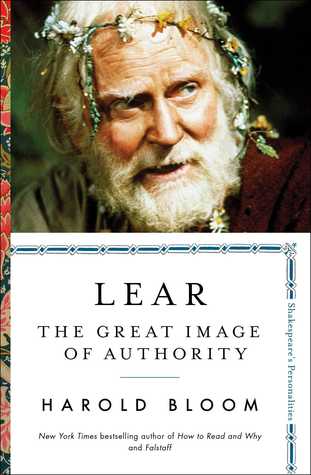 Anyone who’s read much Shakespeare apologia has certainly encountered the works of Harold Bloom.  Lear: The Great Image of Authority is the third book in Bloom’s “Shakespeare’s Personalities” series.  I had quite enjoyed the second volume on Cleopatra and looked forward to this volume.

Unfortunately this one did not work quite so well for me.

This felt like a director’s notes on a play’s character – which could be really fascinating if it revealed something new or had some insight that hasn’t already been presented by many other writers and directors.  And the writing examines Edgar, Goneril, and Regan as much as it does Lear.  At one point I actually flipped back to the beginning to make sure I had the correct subtitle and that it wasn’t something more along the lines of “The Effects of Edgar on the great King.”

I’m not sure, but half this book might just be dialog pulled from Shakespeare’s play.  I can read (or watch) the play myself – more analysis of the dialog, and how it defines a character would have been welcomed.  Yes, there was some, but it was rather pedantic.

Bloom has written some wonderfully introspective works. but regretfully, this isn’t one of them.  I’ll look forward to the next volume in the series, but with hopes that it will be more of a “Personality” retrospective rather than a director’s moderate character analysis.

Looking for a good book? Harold Bloom’s Lear does not live up to the “Shakespeare’s Personalities” series, but might be a fine book for anyone directing the play but doesn’t want to do their own research.

Lear: The Great Image of Authority