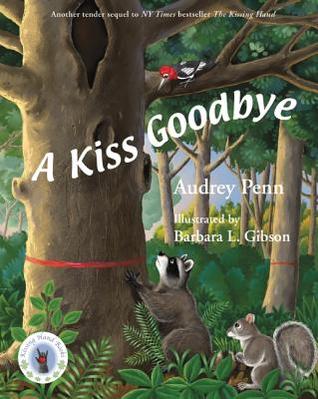 Audrey Penn has a good thing going with her Chester Raccoon series of books.  I don’t know many parents of kindergarteners who aren’t familiar with The Kissing Hand and she’s followed it up with a few other books about Chester Raccoon learning something new.

In A Kiss Goodbye, Chester and family have to move.  There’s a mark around the tree he lives in which is an indication that the humans will soon be cutting the tree down. His mother wants to get him to a new home before the current one is taken down, but Chester doesn’t want to move.  He is comfortable in his current home and he doesn’t want to go somewhere where he doesn’t know anyone.  Moving is a scary thought for Chester, just as it often is for human children, too.  But there is no choice here.  The home is coming down.

But of course Chester discovers some good things about his new home and new neighbors and learns that sometimes moving can be a good thing.

The book is, of course, highly didactic, but to teach a lesson is a big part of why we would read this to our children in the first place.  Fortunately, Penn gives us familiar and adorable animal characters, and artist Barbara L. Gibson provides colorful, fun pictures so that children don’t know they are being taught something.

It is definitely an interesting choice to have the move come about because of a planned cutting when this could just as easily have been a move necessitated by a forest fire or other natural disaster. This should hopefully prompt some parent/child discussion.

One aspect that I questioned was that Chester’s new friend is a female and while, again, nothing is overt here, there is definitely the impression that Chester’s interest in his new friend is more than merely platonic and that he’s maybe even a little confused by this new interest of his. I found this distracting and felt I didn’t need this other layer to the story.

Still, this is an overwhelmingly positive book for children.

Looking for a good book? For anyone with young children and facing a new move, this is a delightful and helpful picture book.