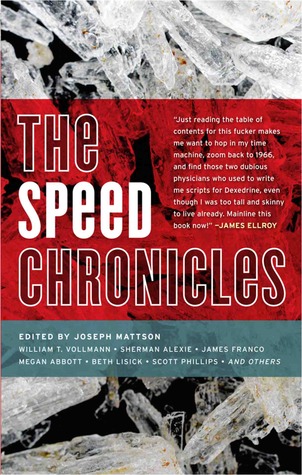 I truly didn’t know what I was getting into when I requested this book.  I wasn’t aware that there was a series of drug-related short fiction books. (Yes, I am naive enough to think that this might have been about things that move quickly!) WHat attracted me to the book, though, were some of the names of the authors who has stories here.  Names such as Sherman Alexia, James Franco, and Megan Abbott.

As Joseph Mattson reminds us in his introduction, drug use has certainly played a factor in the lives of some writers, such as Jack Kerouac, Susan Sontag, and Philip K. Dick, and so it makes a certain sense to pay homage to this chemical muse.  But I would have to say that the Puritan part of me (the boring part of me?) takes issue with any sort of promoting of illicit drugs. Though the stories here do not all necessarily promote or encourage drug use.

The book is divided into sections: Madness; Machination; Methodology; Medicine.

This is an anthology of stories by different authors and it’s typical that I found some of the stories to be interesting or engaging, while others were flat and lifeless. Unfortunately, there were too many of the latter in this instance. Perhaps it has a lot to do with the fact that I just can’t relate to most of these people?

Sherman Alexie’s “War Cry” was the clear standout in this collection as a meth-induced war dancer on the rez goes … well … on the war-path.

“How to Go to Dinner with a Brother on Drugs” by Natalie Diaz definitely defines the madness in the section heading, and takes on a real trip.

These are the first two stories in the collection and so it opens quite promisingly, but we tend to go down from there.  Except for Jess Walter’s “Wheelbarrow Kings” and “Everything I Want” by Megan Abbot and “No Matter How Beautifully it Strings” by William T. Vollmann (and maybe the editor’s own “Amp Is the First Word in Amphetamine”), the rest of the stories disappear into obscurity.

There really isn’t enough here to justify the price of admission, proving once again that drug use can be an expensive, bad habit.

Looking for a good book? Just say “no” to The Speed Chronicles, edited by Joseph Mattson.  Any story worth reading will likely be found again in better collections.