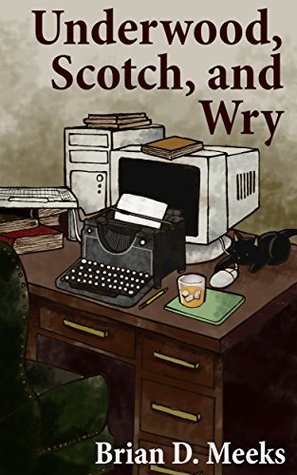 Arthur Byrne is a college professor with tenure and a penchant for scotch and female teaching assistants and a talent for avoiding technology.  The Luddite professor has become a little bit of an embarrassment for the small college, looking to improve and grow, but they can’t do much about a tenured professor.

Byrne is assigned to teach a class on Social Media – a tough course for a Luddite who doesn’t even like to read emails.  But Byrne manages to pull himself together enough to take on the challenge, and with the help of his TA’s, he even manages to make the class interesting – to the point of it becoming a much talked-about class. And so the school officials look for another way to remove this blight on the university, hoping to catch him in the act of cavorting with an undergrad.

Will Arthur grow up and become the professor everyone wants to learn from, or will the university catch him with his pants down and finally be able to rid themselves of him?

The book started out quite interestingly and the story held me at the start, but as it went along it grew a little more implausible and the character of Arthur Byrne grew more and more annoying. The character of Byrne came across not as a character with witty, snappy comebacks, but as an extension of the author who was trying to show off how clever he could be.  Perhaps this isn’t the case, but the snappy comebacks never rang true and his patter, while it might have been fun if he were among friends, really made him out to be a jerk.  The description and some of the reviews refer to him as ‘snarky’ but snarky, as a constant, is straining.

As Byrne got more and more in interested in the topic he was teaching, he became likable. We could see the professor that he could be – someone actually interested in seeing students learning something. But as the students began to take an interest in what he was teaching, his popularity seemed to go to his head and he strutted around, cocky and untouchable.  Even a lawsuit by the university doesn’t faze him and he walks around as though he’s above it all.

As the book ends, our protagonist’s misogynistic and hedonistic ways are confirmed and we can’t help but wonder if he learned anything valuable at all.  We certainly didn’t.

Looking for a good book? Underwood, Scotch, and Wry by Brian D. Meeks is a tribute to tenured college professors who play with co-eds and avoid any actual educating, but it is not a recommended read.