RUNNING ON THE ROOF OF THE WORLD – Jess Butterworth 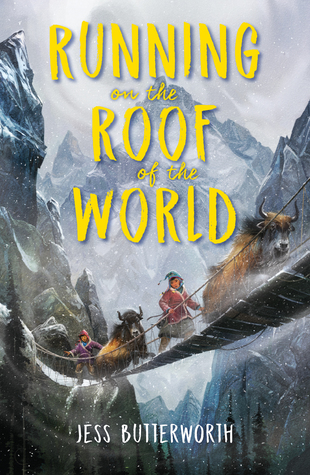 Tash is a Buddhist in Tibet, which is dangerous as Tibet is occupied by the Chinese and they have forbidden worshiping as Buddhists.  Tash and her family practice their faith in secret and outwardly behave in such a way that the Chinese soldiers won’t give them a second glance.  But Tash is aware of the strife as she watches a man set himself on fire in protest to the Chinese rule. Tash’s father runs the local newspaper and when he doesn’t report on the man who set himself on fire, she asks questions about why it wasn’t newsworthy and she learns that her father publishes what the Chinese tell him to publish. Soon after this, Chinese soldiers storm the house and while Tash hides, her parents are both taken in to custody.  Tash narrowly escapes, with a note from her father which she intends to deliver to the Dalai Lama.

Tash and her friend Sam brave the elements and the soldiers looking for the duo as they cross the mountains trying to get into India and to the Dalai Lama.

I wish books like this had been more accessible when I was a young reader.

Author Jess Butterworth delivers a political adventure story that engages, educates, and entertains. Every moment of the Tibetan life under the Chinese rule is totally believable and shows our young readers what an occupied country might feel like to the youngster.

Tash is a little bit larger than life as she pushes against unbelievable odds, but that is precisely what you want in such an adventure story – a young protagonist pushing her/himself to the limit and a little beyond, to show that it sometimes takes an awful lot to really get what you are working for.  To escape the soldiers with guns repeatedly also requires a little bit of luck, which Tash definitely possesses.

While mostly an adventure story of survival and the fight for freedom of an entire country, there is also some mystery here as Tash attempts to learn who her father really is and what the cryptic message she is delivering really means.

Looking for a good book? Running on the Roof of the World by Jess Butterworth is an all-around well-told story that really should capture a young reader’s interest and that reader will likely learn a thing or two along the way.

Running of the Roof of the World