IN THE LAND OF THE LIVING – Austin Ratner 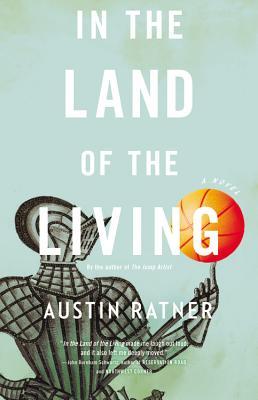 Just as there are books that one might call “Chick Lit,” so too are there books best described as “Bro Books.”  This is a “Bro Book.”

Isidore Auberon lost his mother when he was very young.  His father was fortunately absent a lot, but was abusive when present.  Isidore works hard to over-come these early life obstacles and to make something of himself, and he does so.  Graduating from Harvard and medical school, marrying a beautiful woman whose father becomes the father he’d always hoped for, and becoming a father himself has Isidore living a dream life.  But Isidore’s DNA  is hard to avoid and his own rage sometimes over-shadows his talent and puts a wall between himself and his sons.

Isidore’s sons, Leo and Mack, grow up in the shadow of their father – a well-respected physician – and they don’t get along.  Leo tends to be angry a lot and works hard at just trying to find ways to please his father.  When Leo and Mack take a cross-country trip together to find ways to reconnect and to reminisce about their father.

I enjoyed author Austin Ratner’s simple, direct writing style and I definitely fell into a melancholy rhythm while reading the book.

There is a lot of truth and accuracy in this story, as most adult sons would likely admit, which makes it both recognizable and uncomfortable to read at times. We don’t always like to admit to the darker aspects of our selves.

And so, while the story rings true, I’m not sure why I needed it.  I didn’t get anything from this other than a little id/ego recognition.  It is most certainly something that I would enjoy much more than my wife would, and both my father and my sons would spot me and themselves in the story as well.

Looking for a good book? In the Land of the Living is a novel of men, doing things, over-coming things, and recognizing the past in themselves by Austin Ratner. It is well-written and has more than a little melancholy tone about it.

In the Land of the Living