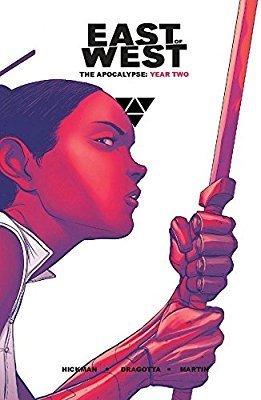 If there is such a thing as the perfect graphic novel, this would be it for me.

Set in a present-day dystopian alternate United States, this ambitious epic presumes that the U.S. Civil War never really ended and there was constant contention between various factions – until a comet hit the center of the country. At the same time, two prophecies were declared and now the Four Horsemen of the Apocalypse (Death, War, Famine, and Conquest) are looking to fulfill the prophecies which would bring about the End of Times.

But something happens and three of the Horsemen are killed and then resurrected as pre-teens, ticked off that Death wasn’t killed and resurrected the way that they were.  Meanwhile, the child Babylon is on a walkabout along with his companion, Balloon, an Artificial Intelligence machine set to turn Babylon into the Beast of Apocalypse.  Babylon wears his own AI headgear so that he ‘sees’ things differently than the way the might appear under normal circumstances.

If this is sounding a bit ‘heavy’ or even weird, you are absolutely right, and the art by Nick Dragotta adds to the unusual nature of the story in the most stunning, beautiful of ways. This is not a light comic or even a superhero-style graphic novel.  This is an intense, well-crafted epic story.

I’ve written before that I like a story where the stakes are high and that’s certainly the case here, but we’re still involved with the characters on an individual basis. The use of literary/Biblical allusion is also tremendous and adds to the weight of the story.

I am absolutely blown away by how perfectly the story and the art blend to draw us in to this strange world. Nothing here looks ‘real’ in the sense that we might look out the window and see something we recognize.  This is 1960’s style conceptual art, combined with 21st Century high-tech gizmos.  It is intense and yet easy on the eyes.  Our eyes flow from panel to panel easily, but we stop at each panel because they are all wonderful snapshots of strange art.

Author Jonathan Hickman has a deep, intricate story at work here and really, this is the only way to take it in – in a massive 500+ page volume.  I reviewed two of the previously published graphic novels (100+ pages each) and gave them only three stars, but I did mention that there was clearly a lot going on.  So much so, apparently, that I couldn’t quite get it in 100 pages. But now that I have it, I’m absolutely hooked and count myself a fan. If I were to read only one graphic novel series for the rest of time, this would be the one.

Looking for a good book? East of West, The Apocalypse: Year Two is a truly epic graphic novel with stunning, unusual art and a story that is deep and intense and absolutely engaging. This is highly recommended.

I received a digital copy of this book directly from the publisher in exchange for an honest review.