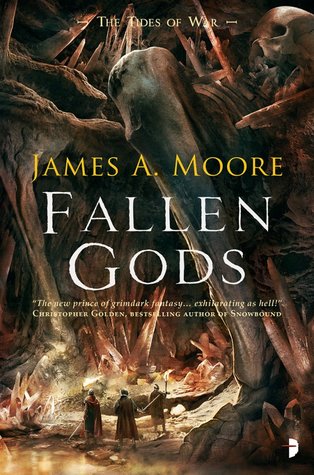 So… I read and reviewed the first book in this series not too long ago and enjoyed it enough to jump right in to this volume.

Author James A. Moore picks up where he left off, which is helpful to those of us who’ve read the first book (but will it be confusing to those who are starting with this volume?).  Brogan McTyre is a wanted man. He and his family were chosen by the gods to be sacrificed, but Brogan broke custom and challenged this sacrificial offering to the Grakhul and he has continued to challenge the gods at every turn.  What’s the worst that will happen …?  The death promised by the sacrifice?  Brogan and his allies build an army to fight off whatever the gods send.  But the gods aren’t too happy and it could mean Armageddon.

Moore delivers this book in short bursts – hitting the reader with a series of literary rabbit punches instead of looking for one knock-out punch.  Each chapter is told from multiple points of view. Normally I don’t care for this too much, but Moore has included a large cast of characters, made each of them unique in some way, but best of all, he has me liking most of them so that I want to read about each one.

Moore also finds just the right balance of action, drama, and humor, often using the different character/story lines to provide the reader with the needed boost of humor/action/drama at just the right time.

This is still a wild adventure with plenty of action and bloodshed and just as with the first book, we have a conflict on a grand scale – mortal men against the gods – which keeps the stakes high and exciting. But it is the immediacy of the present characters – their journeys and squabbles – that draw us in and have us turning pages.

Moore is clearly a talented story-teller. The action and characters here are throwbacks to Robert E. Howard and Fritz Leiber and the epic-ness of the story is not unlike Tolkien.  It’s all-around excitement.

And for all that there is one small issue with this….  This is not a complete story.  You MUST plan to buy the entire series to get the full story.  This book doesn’t end so much as it builds a bridge to the next book.  Do I want to read it?  Absolutely!  But do I like being suckered in to it this way?  I do not.  I’ll buy a book based on my enjoyment of reading an author, not because s/he left a story unfinished.

Looking for a good book? Fallen Gods by James A. Moore is the second book in The Tides of War series – and that’s important to know.  It’s thrilling, bloody, and fun, but you’ll really need to know what happened in the first book to get the most from this volume.

series: The Tides of War #2