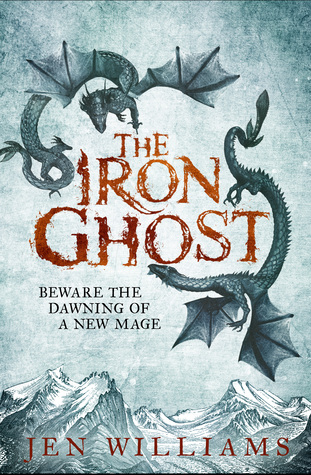 Jen Williams’ The Iron Ghost is the much-anticipated (by many) follow-up to The Copper Cat.  It is a sequel only in that it includes most of the same characters, in the same world, though it doesn’t necessarily follow-up on an ‘unfinished’ story.  This is a good thing.  This could be read as a stand-alone novel, though incidents from The Copper Cat are referred to, so it’s nice to have that background.

After their success in the previous book, Frith, Wydrin, and Sebastian are now known as The Blackfeather Three and they hire themselves out – solving a few problems and making a bit of money.  They are on top of the world. But a nasty wizard/mage will challenge their skills.

This book is difficult to read.  The chapters are short in page-length, but heavy, plodding to read.  There’s not a lot of action, but there is a lot of movement and discussion and the short chapters prevent the reader from really getting invested in the story, characters, and action.

By the time I got half way through I just couldn’t wait to get to the end – this band of characters and the adventures they had really didn’t appeal to me.

Looking for a good book? The Iron Ghost is the second book in The Copper Cat series by Jen Williams.  It is a rehash of the first volume with little new or interesting to distinguish itself.