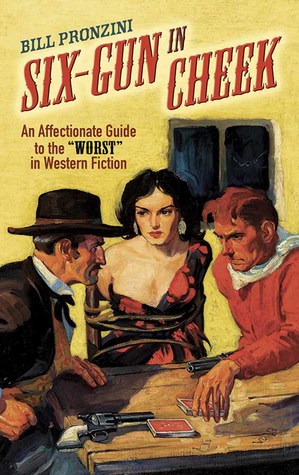 If you mention ‘western fiction’ or simply ‘western’ to most people – even generally well-read people – they will likely have one of two first thoughts: it’s the world of Louis L’Amour and Zane Grey and/or it’s the world of cheesy gun-fights and prose so purple you’ll wonder if Crayola has a crayon named for it.  In this reprint, Six-Gun In Cheek, author Bill Pronzini takes a look at some of the western fiction that has given the genre this reputation.

Although Pronzini doesn’t come right out and say why there are so many hackneyed western stories with such flowery descriptions, we do get a sense that the volume of stories needed to fill so many pages of pulp magazines meant that the editors of the rags … er, mags … overlooked some of the faults in order to meet deadlines and demand.

Pronzini points out that in some cases there were a few particular authors who tended to more of the purple than others. He identifies them by name (when known) and offers up samples of their work. On occasion Pronzini can only speculate on the author.  For instance, Pronzini uses the Black Gold by Jackson Cole as one of the baddest of bad westerns in a range full of bad westerns.  But ‘Jackson Cole’ was a company pseudonym used by a variety of authors – most of whom are known, though the specific titles written by the individuals aren’t as clear.

The book is full of examples with passages and paragraphs and even pages of ‘offending’ literature on display.  Pronzini offers it all up in appropriate batches and breaks it down by ‘type’ for the different chapters.  There is a chapter for “northern” fiction (think ‘western’ but with Mounties instead of sheriffs) and one for sex on the range and one for the identification of heroes and villains in these ‘bad’ westerns, and one for story ideas and plots.  Here Pronzini knows what he’s talking about.  He describes one story (“The Raid at Three Rapids” by Romer Zane Grey) which happens to feature a subterranean cavern full of shafts and secret passages because an old miner “was queer for secret passages and the like … (he) was always talkin’ about bein’ buried alive, on account of a mining accident when he was a button…. I guess that can change a man some.”  Romer Zane Grey?  A nom de plume for Pronzini and a writing partner of his.

Overall, the book is a lot of fun.  Bill Pronzini had to read a lot of bad western fiction to prepare this book and because of his efforts we get to sample, laugh, roll our eyes, and realize why the genre gets such a bad reputation.  I wonder if there’s a “Ray-Gun in Cheek” volume in the works…?

Looking for a good book? Six-Gun in Cheek by Bill Pronzini is a reissue of a fun look at bad writing in the western fiction genre.

Six-Gun in Cheek: An Affectionate Guide to the “Worst” in Western Fiction