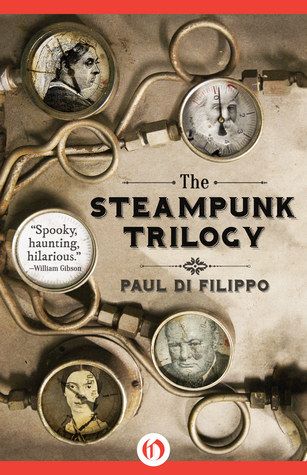 This book features three novellas: Victoria, Hottentots, Walt and Emily.  It also includes some of the most excruciatingly dull genre fiction that I’ve ever come across.

In “Victoria,” the soon-to-be queen disappears and so as to not worry the people, a scientist has created a Victoria-look-alike.  This doppelgänger is created from a human/lizard hybrid, though it still manages to be remarkable realistic in form.  It does have one draw-back, however … it has a voracious sexual appetite and tends to wander off in search of brothels to visit.

Okay…kind of a bizarre idea. But I read plenty of sci-fi and fantasy, so I’m no stranger to bizarre ideas.  And this could have been fun if I was bored with the writing style.

“Hottentots” may be one of the worst things I’ve ever read. Scientist Louis Agassiz abandons his family and heads to America to educate the Americans on a variety of sciences. He is approached by a white South African and his black ‘hottentot’ wife who seek his help in finding a magical artifact.  An artifact that is sexual in nature.

I don’t know what to say about this.  The character of Agassiz, as presented by author Paul di Filippo, is simply a vile human-being.  The story itself holds little-to-no interest and it isn’t helped by featuring such a despicable character whose thick accent is carefully written out.

Let us zit down, und I vill explain all. Perhaps dot decanter of zherry I zee dere vould help lubricate mine zpeech—  …  You are Cuvier’s zientific heir, und bear der responsibility for his deeds. It ist your moral obligation to help zet right vot he ztarted. Und you are a man of zome influence here, und can zpeed up der zearch

Has this ever worked well in written form?

Although one-third of the work in the book, this story alone is reason enough to avoid the collection.

Let it not be said that there’s no theme running through these stories. I would argue their ‘steampunk-ness’ but they all definitely are set in the Victorian era (not really reason enough to be considered steampunk) and they all deal with sex as a primary motivator to the characters.

In “Walt and Emily” Emily Dickinson and Walt Whitman hook up and they both write about it in their own ways.

The best part about reading this collection was coming away with the awareness that I’m not interested in reading any more di Filippo.

Looking for a good book?  Me, too.