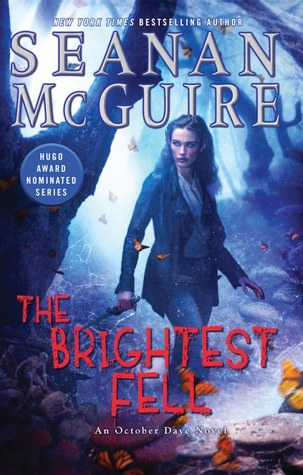 I recognize that I may be one of the last readers of urban fantasy to discover the October Daye series by Seanan McGuire. The first couple of volumes that I read (not the first in the series) showed the signs of McGuire’s crisp storytelling, but I will admit that I was just a little lost with who the plethora of characters were and their relationships to one another. But with this volume, the characters, the relationships, and their abilities became very apparent and I really enjoyed my time here.

October Daye is a half-breed – half human and half changeling.  She’s tried desperately to live her own life and not get caught up in the politics of the Summerlands … the fae land that exists on the other side of the mirror.  Though she chose to be changeling rather than human at the age of sixteen, she ran away from her mother Amandine (the Liar) at the age of twenty-five and now tries to live peacefully on earth with her Summerland and earthling friends.

As this book begins, Amandine pays October a much undesired visit.  Amandine wants October to find her older sister, August.  August has been missing for over 100 years.

It isn’t lightly that Amandine would demean herself to seeking October’s help and it is reluctantly that October agrees to help.  But because Amandine is the vindictive and suspicious sort, she takes a couple of captives – October’s friends – to ensure that October will complete her promise.  If October hadn’t had any real motivation to find someone missing for a century, she had it now.

But Amandine isn’t known as Amandine the Liar for nothing.

Wow…this was fantastic.  The intricacies woven into this story are tight and spectacular.  The character of October became much more clear to me with this book (again … I haven’t read the entire series), and the relationships of the multitude of characters is much clearer.

I really liked the appearance of some creatures who provided a unique look at October’s past, October’s general character, as well as revealing the variety of life in Summerland.

I really don’t want to reveal too much here because McGuire is a reading delight and making discoveries right alongside her characters is absolutely delicious.  The characters are well-fleshed out and the world these stories takes place in feels full and real and not just another Charlaine Harris/Carrie Vaughn/Kim Harrison rip-off.  There was so much packed in these 350+ pages that I felt I read an entire epic rather than just one book.

You’ll want to read this.

Looking for a good book?   The Brightest Fell is the 11th book in the October Daye series by Seanan McGuire.  You don’t need have to have read the previous ten books in this series to understand what’s going on or who these characters are or to have a tremendously good read … but you’ll want to.