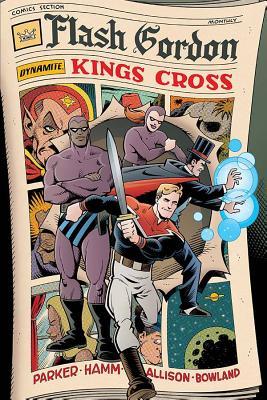 I have been a fan of the Flash Gordon character since … well, I don’t know when.  Probably when I read The Lion Men of Mongo (by Alex Raymond) back in 1974.  Since then I’ve eagerly read almost anything with the Flash Gordon name on it.

This graphic novel, by Jeff Parker and with art by Jesse Hamm, really isn’t so much a Flash Gordon story as it is a “Defenders of the Universe” story – a series by Dynamite Entertainment that mashes together a number of popular pulp-style heroes joining forces to … well … defend the universe.  In this story, our band of pulp heroes (Flash Gordon, Mandrake the Magician, The Phantom, and Prince Valiant (Prince Valiant?!)) are defending against Ming the Merciless, Flash’s greatest foe.  Ming is teleporting an entire continent from Mongo to Earth so that he can begin his reign of terror and take over the planet.

Parker moves the story along very rapidly, making this read more like a series of Sunday comic strips rather than a book length story.

Hamm’s art is cartoon-y, making this feel like early 1950’s comic strip art, which at least lent an air of nostalgia to the piece, which I enjoyed. However, the art did take me out of the story.  I often thought about a panel or even a page and why I liked it or why I didn’t like, and what seemed ‘different’ about it, which meant I wasn’t really thinking about what was happening on the page.  Not that I missed much.  The story was oddball corny and prompted more than a few rolling eyes on my part.

I definitely wanted to like this (I haven’t requested many graphic novels to read lately), but other than for a bit of strange nostalgia, there really isn’t anything here that would make me want to read more of this Defenders of the Universe series and I certainly can’t recommend it to anyone.

Looking for a good book? The graphic novel Flash Gordon: King’s Cross is part of the Defender’s of the Universe graphic novel series and fans of the series will want to read this installment but anyone else should probably just keep on looking.