IN THEIR LIVES – Andrew Blauner, editor 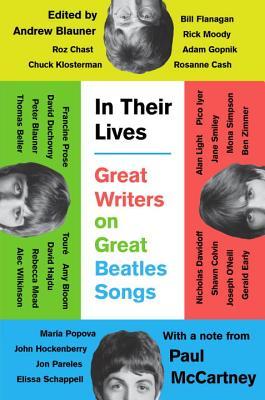 There appears to be no end to the number of ways to get The Beatles on the cover of a book.  I’ve read more than a few in the last few years since I started this book review blog.  Since it seems that enough biographies have been written and there have been some well-researched, in-depth looks at the recording sessions, and we’ve turned now to more and more reflections on The Beatles.  If you’ve ever listened to a Beatles song, it’s time to get out your pen and jot down your reactions so that you, too, can put out a Beatles-related book.

The sub-title to this book is “Great Writers on Great Beatles Songs.” Both of these subjects (“Great Writers” and “Great Songs”) are clearly a bit subjective.  As to the songs, just because it’s a Beatles song doesn’t make it ‘great’ and even some of these writers refer to the song they write about as not great.  “Helter Skelter” may be famous, but is it a great song?  “You Know My Name (Look Up the Number)”? As for the writers … I may be familiar with the names of a quarter of these writers and I’m not sure I’d refer to any of these authors as “great.”  But what’s really important isn’t the title, but the essays themselves.

As with almost any collection of essays from different writers, some of these were wonderful and extremely engaging for me, while others were flops.

The first essay to really grab me was Gerald Early’s “I’m a Loser.”  Early writes about coming to The Beatles as a black youth. Black boy/white music.  This isn’t a perspective I’d ever thought about before.  In fact it had never occurred to me until I’d read this that The Beatles might be seen as “white music”.  Early brings about his childhood very clearly and this really made me think.

“Eleanor Rigby” by Rebecca Mead was another reflection that I really enjoyed.  Mead weaves the history of the song in and out of how it came about to have such a profound affect on her life.  When we think or reflect on The Beatles and the culture of the time, we too often think in a grand scale and the social effects The Beatles had on society, but Mead reminds us that during this time there are simple lives, fracturing, and that sometimes music holds us together.

Alec Wilkinson writes about “She Said She Said” and describes drug use by the listener in such a way as to make us feel as though we might be just a little bit high as well.  He does a really nice job of making the association.

Nicholas Dawidoff writes about “A Day in the Life.”  His essay seems a little less personal and writes about how The Beatles worked together, even through their difficult times.  Although it felt a little different in scope from the other works in the collection, I really appreciated this take on the teamwork of the Fab Four.

And finally, “I Am the Walrus” was written by Ben Zimmer.  He starts by stating “Inspired nonsense has held me in its spell for as long as I can remember” and I knew that I would be able to relate to Zimmer and his thoughts on the song. And I did.

Most of the rest of these were incredibly average.   Pico Iyer’s “Yesterday” felt more like a work of fiction and because of that I didn’t care for the piece at all.

It’s interesting to think that this book isn’t really about The Beatles at all, but rather it’s about these twenty-eight different writers and one of the few things they all have in common – their listening to The Beatles. Because of this, I’m not sure much I would recommend this book.  It’s really a series of mini-memoirs, each focused on a Beatles song.  But as I mentioned earlier, I don’t really know any of these writers so how The Beatles affected them really means nothing to me.  Only you can decide if this sounds like something that might interest you.

Also, I found it rather humorous that there’s a “Note” from Paul McCartney at the beginning of the book, surely to help lend some authenticity to the work.  But I couldn’t help but laugh at McCartney’s last lines “Enjoy read it. I know I will.”  Will?  He’s written a Note for the book but he hasn’t read it yet?  Yup.

Looking for a good book?  The collection of essays, In Their Lives, edited by Andrew Blauner, reflects on how The Beatles and their music personally affected each writer. Some of these essays are most definitely worth reading.

In Their Lives: Great Writers on Great Beatles Songs

One comment on “IN THEIR LIVES – Andrew Blauner, editor”