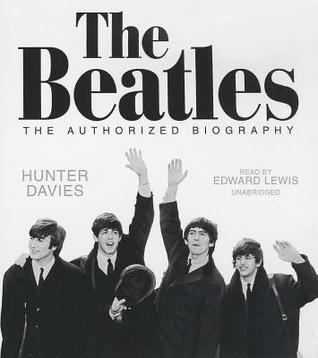 Over the last couple of years I’ve read a few Beatles-related books.  Recently, while anticipating a couple of long drives, I borrowed an audio book from my local library – The Authorized Biography, The Beatles, by Hunter Davies.

Davies was one of the few people allowed on the inside of The Beatles’ group, accompanying them to the recording studio, or on vacation, or simply visiting them at home.  He also had unprecedented access to the families (parents, siblings, wives, etc), including some parents who have been estranged from the family.

I’ve read a lot of material on this group, but it has mostly been piecemeal and speculation.  Davies’ book really does get to the heart of the group.  I’ve been a fan for forty years or so (though not a ‘fanatic’) and have read a number of books about them, but this one really does provide insight and give information that I’d not read anywhere else.

This audio book is a relatively new edition and there are two “Introductions” to previous editions.  In audio terms, these introductions run for over an hour.  One of them actually provides some really critical information about the book, including why certain aspects are relatively tame or not mentioned at all (having to do with who had to approve the copy before going to print).  This introduction is possibly as interesting, if not more so, than much of the material in the book itself.

I am by no means an authority on the Beatles, but I’ve read a lot of material about them and about their influence and an awful lot of information about these four lads is readily available, but this book really is the definitive chronicle of them, both as a group and as individuals.  Davies had access not only to the members of the group and their most intimate associates, but also the families of these influential musicians – access that can’t be recreated today.  And as he notes even back in the late 1960’s, the Beatles themselves often didn’t remember dates or locations particularly well or accurately back then – so the information only gets more and more confused or lost with the passage of time.

It is fortuitous that Hunter Davies took the steps he did to connect with the band and sell the idea of writing a biography of the group, and great that he pushed for it even when others said that the band was just a passing fad and no one would really be interested.  This book is a MUST read for anyone interested in knowing more about The Beatles and their influences.

As for the audio book…

Our narrator, Edward Lewis, comes across as a bland, male version of Siri.  His narration is so monotone and computer-like that when he does offer some inflection it really stands out. On my longer – four and five hour – commutes, I grew used to the narration and could tolerate it.  But on my shorter commutes (half and hour) I couldn’t get in to this terrible voice.

I highly recommend the book, but I do NOT recommend listening to the Audible/book on CD.

Looking for a good book? The Beatles by Hunter Davies is a thorough, remarkable account of the Beatles as must be read by any true fan of the popular group, but the Audible/CD version has some of the worst narration for a book I’ve ever come across.