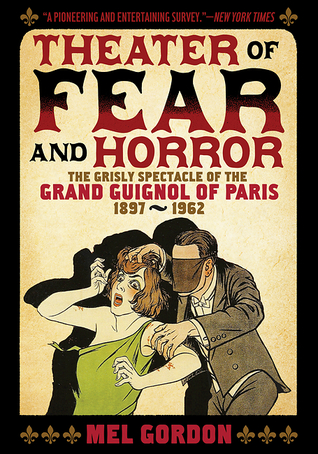 I’ve heard of the Grand Guignol of Paris and that it was horror or even depraved theatre, but I didn’t really know too much about it.  It’s not the sort of theatre taught in the local colleges.  The sub-title, I think, really gets it right when calling it a “grisly spectacle.”

Author Mel Gordon has thoroughly researched this popular French form of drama and given us a look at the performers, the stories, and the audience that is second only to having been to the Grand Guignol in person.

But what Gordon doesn’t do is analyze this theatrical form and explain why it was so popular.  There was a movement of Naturalism going on at the time, but France was also reeling from the violence of war.  Was this a means to take out some aggression toward aggressors? Was it a means to dull the senses toward horrendous violence?  Was it simply that some people respond in a positive way toward sadism?

Given the Grand Guignol’s penchant for grisly spectacle, I would have really liked to have gotten more information on their tricks and techniques for their mutilation of a body and the blood they managed to spill.  How long did it take to prepare and practice the physical aspects of these plays, compared with a more routine theatre rehearsal?

While we get a brief biography of the key players in the company, each of them is likely worthy of having their own biography.  I definitely wanted to know more about these people.  What drew them to this form of ‘entertainment’?

It does feel like there’s a fair amount that is NOT here in the book, that’s party due to the fact that there aren’t many books on this subject so when questions or interest arise while reading this, there aren’t many other sources to turn to for more information.  But what IS here tantalizes and informs nicely.  I enjoyed reading through the synopses of the many plays in the theatre’s repertoire.  Some made me chuckle at what seems silly now.  For instance:

NIGHT ATTACK
by ANDRÉ DE LORDE and M. MASSON-FORESTIER
A farce in two acts with the additional theme of Cuckoldry.
A woman comes to a police station late at night, distraught that her lover has just had a heart attack in bed. She asks the police chief to help move the body before her husband returns from a business trip. Since she is pretty, he agrees and they return to her home.
At the house, they attempt to move the lifeless body but the man awakens. As soon as the policeman starts to care for the sick man, the telephone rings. It is the woman’s husband calling to tell her that he will be arriving on a later train. With the approval of the woman, the officer attacks the ailing lover and drives him out of the house. The policeman takes the woman to bed.

It is a farce, so you can’t expect too much plot, and it’s probably not that different from many farces today.  This play is from 1903!

I love theatre history and this book explores a theatrical form that isn’t often mentioned, yet thrived for nearly sixty years.  It is well worth reading.

Looking for a good book? Theater of Fear and Horror by Mel Gordon takes a look at the Grand Guignol in France – a theatrical art form that explores the darker side of humanity. It was a highly successful venture in its time and yet most history books and theatre historians don’t mention it.  You should read it.

Theatre of Fear & Horror: Expanded Edition: The Grisly Spectacle of the Grand Guignol of Paris, 1897-1962