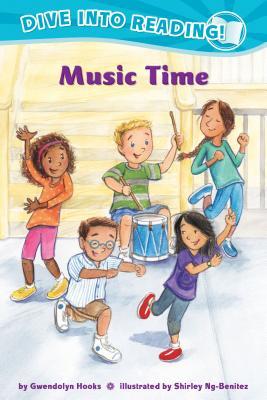 This is a thirty-three page Easy Reader book intended for those youngsters who’ve just discovered the joy of reading, and hopefully getting them interested in music as well.

In many ways it does just what it sets out to do.  It is short.  The stories (there are multiple chapters in this brief book) are simple and easy to follow. The art is bold and lively and helps hold the young reader’s interest.  It will certainly be purchased by school libraries and some public libraries with a large children’s collection.

But I have two small issues with the book – not meant to discourage younger readers, but for adults to consider.

First … it’s titled Music Time but it’s about drumming.  As someone who played drums for 8+ years in school and still sits at a trap set now and then, I’m intimately familiar with the fact that drums are an integral part of music, but drums are a rhythm instrument and not typically considered a ‘musical’ instrument.  You play beats but not musical notes.  And while there is a variety of sounds one can play, particularly on a trap set, anyone the correct age for this book is not likely to be put on a trap set.

As a drummer, it’s nice to see a drummer get some attention, and even nice to be included in ‘music’ but it may make a few people pause.

My second issue is with diversity.  The cover features a moderately diverse group of youngsters, but the featured child musician is a blue-eyed blond boy.    There’s nothing wrong with that … blue-eyed blonds are a part of a diverse culture as well, but in an element (drumming) that has been dominated my males for years, perhaps a young girl would have been nice?

Looking for a good book? Music Time is an easy reader by Gwendolyn Hooks with art by Shirley Ng-Benitez that features a young boy who loves to play drums.

I receive a digital copy of this book from the publisher, through Edelweiss, in exchange for an honest review.