THE COWBOY AND THE VAMPIRE: A VERY UNUSUAL ROMANCE – Clark Hays and Kathleen McFall 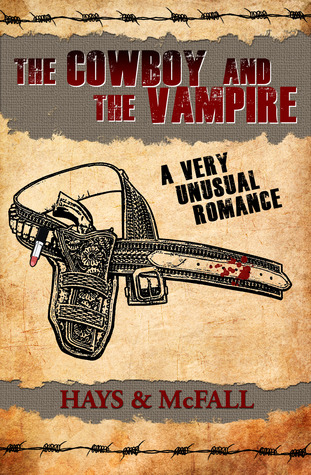 An attractive New York reporter, Lizzie, is sent to the small town of Lone Pine to try to get an interview with a real cowboy – if any still exist. But of course one still exists.  His name is Tucker, but he’s too busy doing cowboy things to talk to a New York City reporter. But every time she tries to talk to someone else, she’s pointed right back to Tucker because Tucker’s the only real true cowboy left. Tucker would rather hang out with his dog, though, than talk to a New York City gal.  But talking isn’t the only way to communicate, and after a night between the sheets, Tucker is smitten for the lady.  But the lady has a dirty little secret… she’s really a vampire.  So?  That doesn’t bother a real cowboy. But her bigger secret is that the king of vampires wants her (for some rather disgusting reasons I’d rather not go into here).  Can a cowboy from a small town take on a king of vampires in a metropolis like New York?  There’s only one way to find out!

The book had me hooked early on (the second time I tried reading it).  The set-up is fun.  The set-up is a little cheesy and the dialog is straight out of a spray can of cheez-whiz, but the tough-talking cowboy who’d rather hang with his mutt than a sexy lady was clearly going to go nowhere but the bedroom.  And the revelation of being a vampire brought with it a certain amount of excitement – and a wry smile: where are they going to go with this?

But then the book really falls and so did my interest.

The big bad king vampire and his lust for Lizzie just didn’t work, and because I never got behind that, Tucker’s tough take on big city vampires just became laughable – and not in a good way.

‘Campy’ is okay, and there are some delightful little gems …

I watched as he poured a tripe shot from a decanter. “It’s older than you are,” he said, handing me a glass.
“And a hell of a lot smoother,” I said, after taking a sip.

… but not when it tries to become a more serious adventure after the camp was established.

Cowboys? Check. Vampires? Check. But it’s still not for me.

Looking for a good book? The Cowboy and the Vampire: A Very Unusual Romance by Clark Hays and Kathleen McFall starts out as a delightful tongue-in-cheek comic-romance but when the paranormal activities take dominance, the book begins to slow.

The Cowboy and the Vampire: A Very Unusual Romance

series: The Cowboy and the Vampire #1