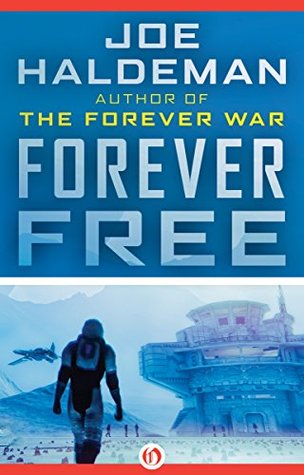 Although I had read Haldeman’s The Forever War when it was first published in the 1970’s, I had not read any of the sequels to the book.

Forever Free followers our ‘forever soldier,’ William Mandella,  who is a man without a country … without a world.  As he fought in the intergalactic wars, thousands of years passed on Earth and he no longer recognizes what it was he was fighting for. Mankind has now become a ‘hive mind’ simply called ‘Man” and Mandella and a few of his fellow soldiers now feel even more lost  than ever and so they go in to a self-imposed exile, hoping to settle on a planet known as Middle Finger.  The colonists struggle to survive despite carefully hand-picking the members who would join them for what they could bring to the group. But a surprise awaits Mandella and his fellow exiles.

I am glad I waited to read this as my disappointment is lessened because my expectations were low.  The book has been around for a while but I haven’t seen many lists proclaiming it a ‘must-read’ and so I expected it to fall short. And it does.

Haldeman does a nice job of building the story and bringing us back into the life of William Mandella and a great deal of time was spent following he and his wife and close associates making plans and embarking on a new life.

And then Haldeman cops out.

Perhaps, when this was written, Haldeman’s ending came as a surprise and was quite original, but the deus ex machina sensibility here rings hollow today. The ending comes completely out of nowhere as if the author had nothing more in mind for the telling of Mandella’s story and decided to just end it.

The first book, and even the first part of this book, had such strong parallels to the Vietnam vet coming home to a country they didn’t recognize that it proved to be a wonderful sci-fi social commentary, but then the sci-fi part took over and erased what had worked so nicely.

I graciously give this two stars because Haldeman starts out on a nice path, but let’s go of it at the end.

I cannot recommend this book.

Looking for a good book?  Read Joe Haldeman’s The Forever War, but go no further and do not read Forever Free.