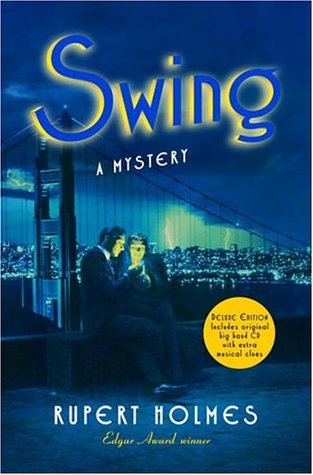 I was walking through one of my local libraries recently, just looking to see what caught my eye when this book popped out at me.  Rupert Holmes…a name with which I am familiar, and ‘Swing’ … one of my favorite styles of music.  This looked tailor-made for me.

Ray Sherwood is a jazz saxophonist.  He also happens to be an accomplished arranger.  Currently, Ray is in the San Francisco area with the Jack Donovan Orchestra for the Golden Gate Exposition and there is no shortage of attractive co-eds to add to the excitement of the World’s Fair. One such beguiling co-ed, Gail Prentice, seeks Ray’s help.  A composition she wrote has been selected as a composition winner and will be performed at the exposition.  Now Gail needs someone to arrange her piece for a full band.

It’s a lot of work, and Ray looks to lose money on his time investment, but music (and women) are his life and he’s impressed enough with Gail’s composition that he looks forward to the challenge.  It will also take his mind off another young woman he encountered about that same time – a woman who leaped to her death from Treasure Island’s Tower of the Sun.

What I was hoping for … and got … was a mystery in which music played a key role.  I can’t say too much about it without giving a lot of the mystery away, but trust that music is key.

While the mystery itself starts off pretty spectacularly, much of the book is a slow process of character introduction and establishing location and talents.  The meat of the mystery doesn’t really develop until three-quarters of the way through and most who’ve read a fair number of mysteries can probably anticipate where this story is going.  Still, it is, in fact, Holmes’ character development and knowledge of music that keeps the story interesting.  The chapters are quite short, making this a very easy read.

Anyone who can get a copy of the book that includes the CD will be rewarded with some fine music.

This was just what I was looking for while trolling the local library and I enjoyed the read.

Looking for a good book? Swing, by Rupert Holmes, is a delightful read and the perfect sort of mystery to read on a beach in the summer or while settling down in front of a fire in the colder months.