THE SKY: THE ART OF FINAL FANTASY – Yoshitaka Amano 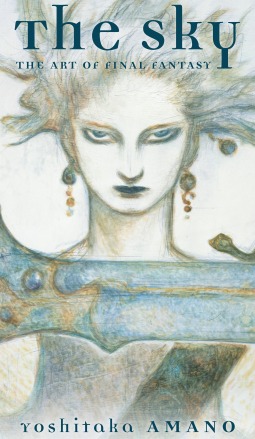 I’ve never played Final Fantasy but I’m certainly familiar with the video game series, but my requesting an ARC of a book of Final Fantasy art has much more to do with my interest in art than it does with the subject matter in this case.

The art here is by Yoshitaka Amano.  It is delicate and beautiful – even that of the more dangerous creatures.  Much of the artwork looks like more of a sketch than a finely detailed finished painting but I suspect that this is Amano’s style.

I liked what I saw and this would make a nice coffee-table art book, drawing the attention of not just fans of fine fantasy art, but also anyone familiar with the Final Fantasy video games.

As nice as this book is to look at, there is something missing however.  Words.

Surely the main audience for this book will be fans of the video game, but I would like to think that even the fans would want to know a little about the artwork, and for those of us who aren’t fans of the game(s) a little background would be more than just a little helpful.

Looking for a good book? The Sky: The Art of Final Fantasy by Yoshitaka Amano is pretty to look at but without any background to the art, only the most dedicated of Final Fantasy fans are likely to really enjoy this book.

The Sky: The Art of Final Fantasy