SERENITY: NO POWER IN THE ‘VERSE – graphic novel 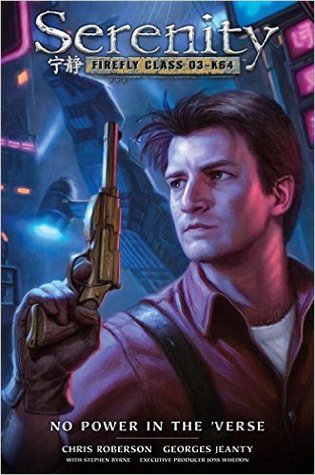 Like many fans of science fiction, I really liked the television series Firefly and the follow-up film, Serenity. The creative force behind the series, Joss Whedon, has kept the series going – not on television, but through graphic novels.  It’s a pretty good means when you think about it.  It’s still a visual medium, but you don’t have to pay actor wages or for sets and costumes, and a variety of technical skills.

There have been a series of graphic novels and they continue the general story-line as established in the series. This isn’t just a series of random adventures. Picking up a novel such as this may seem a bit off to some who haven’t kept up on what’s going on.  ‘Wash’ is dead and Zoe has a child.  But if you’re willing to accept that things have changed, you still get a pretty good Firefly/Serenity style story, complete with Mal stealing from a supply station.  Stealing what?  Toilet paper, of course!

I enjoyed the over-all experience of the greater story (the over-all arc), though the immediate plot(s) felt a little bit weak.  Perhaps it’s just that I don’t quite feel how they will fit into the larger Firefly world yet.

But it’s a good thing that the story itself held my interest, because the art does not.

Judging by the different comics/graphic novels I have read that are based on television shows or films, providing art that represents the likeness of known characters HAS to be extremely difficult, and the art here is very inconsistent.  We have some nice panel work, and really nice colors, and we range from some great action:

to rather cheesy goofiness:

I am also not a fan of the style of not actually inking faces in medium ‘shots’: 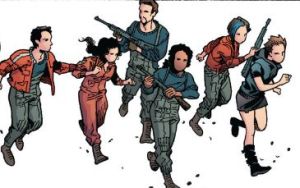 I’d like to keep reading the series for the stories, but I wouldn’t mind a new artist.

Looking for a good book? Serenity: No Power in the ‘Verse is a graphic novel that keeps the Firefly (tv series) universe alive and moving forward, and the stories work well, but the art is mediocre.

Serenity: No Power in the ‘Verse