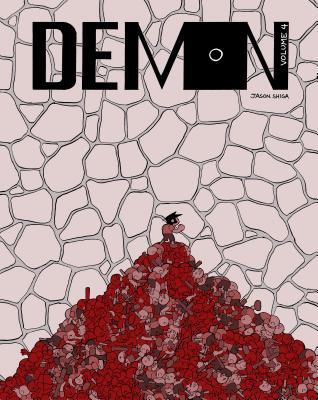 Jason Shiga finishes off his unusual graphic novel series, Demon, with this, the fourth issue.

Jimmy Yee is a man cursed(?)/blessed(?) with a power that prevents him from dying.  He discovers this fact when, about as far down on his luck as a man can get, he tries to kill himself.  The essence of Jimmy is then transferred to the nearest human.  One man seems to understand what Jimmy is and what he can do, but despite his best efforts to capture Jimmy, Agent Hunter isn’t able to contain Jimmy since Jimmy simply kills himself when trapped so that he can take over another body.

Now, over the course of nearly 400 years, Agent Hunter shows that he, too, is a Demon possessed and has spent the last century planning and preparing for the one way to eliminate Jimmy.  And Hunter uses Jimmy’s Demon daughter, Sweetpea, as the bait.

But whereas Hunter has used the centuries to build the perfect fortress, Jimmy and Sweetpea have used the same hundred years to prepare a way into the fortress and exact revenge on Hunter.

The first two issues of this series were tremendous.  Shiga walked the reader into a strange situation without explaining what he was doing, letting the reader figure it out. There was quite a story to unravel and the books took the reader on a roller-coaster journey with plenty of death and destruction along the way.

But these last two issues changed it up.  There’s less story, more death and destruction and depravity, and all mostly without purpose.  This volume steps it back up a step, with each of our three main characters driven by a goal, but the book still feels as though it’s padded with filler, boring me for the most part.

The story does wrap up, which was a nice surprise, but I had stopped caring.  I was interested initially because I wanted to know what was happening and why.  Once those questions were answered, the series became a story about a cat and mouse game between Jimmy and Hunter (want to guess what role ‘Hunter’ played?) and this was much less interesting because really there wasn’t much to describe except the constant evisceration or decapitation of a few billion people.  The entire planet became a breeding ground for slaughter for a couple of people who were trying to best one another.

If Shiga’s ‘point’ behind this book was to show just how much we’ve become inured to violence and depravity, then he’s succeeded.  If he’s simply trying to entertain … mmmm, he’s succeeded only to a point, and then passed us by.

I was glad to have read this series, but have been left unimpressed.

Looking for a good book? Demon, Volume 4 by Jason Shiga finishes off the series, and humanity as well. It’s worth reading if you’ve started the series, but not recommended.