GIRL IN A BAND – Kim Gordon 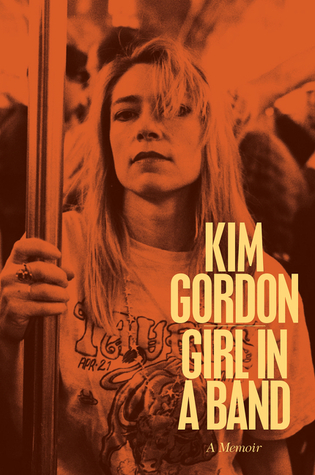 I’m pretty fascinated by music and musicians (if I could live my life over again I would try to write music) and when I saw this biography of a founding member of Sonic Youth, I thought I would try it out.  I borrowed the audio version from my local library for my drives to/from work.  The audio is narrated by the author, Kim Gordon.

Though I’m a fan of most music, Sonic Youth appeared on the scene during one of the very few points in my life when I was not listening to much music and so I know little-to-nothing about the band. Still, I recognized the name and wanted the inside scoop, as it were, on this group.

Gordon approached her story very distantly, which strikes me as surprising.  It’s almost as though she has no vested interest in the subject;s life, even though it’s her own. In some ways it’s hard to differentiate between the story and the narration. Her vocal attention was very laid back and calm, showing almost no emotion even during some very emotional times.

Gordon’s life is interesting but it never comes across as anything special.  I understand that from a personal point of view she may not have recognized that what she was experiencing – being a lead female in a very male-dominated art form and creating something ‘new’ – but if she still doesn’t see it after the fact, reflecting on the scene, then she’s kind of blind and a biography/memoir is sort of pointless.  What we do get is a fair amount of name-dropping from the art and music scene of the time.  I’ve never been much impressed by name-dropping and less so when I don’t even know the people being mentioned.  I guess I’m just not hip enough to ‘get’ it.

All in all, this was a disappointing read/listen.

Looking for a good book? Girl in a Band is an autobiography/memoir by Kim Gordon of her lead up to and involvement in Sonic Youth, a popular rock band from the 1980’s-90’s.  It’s not quite as titillating as one might expect.

Girl in a Band