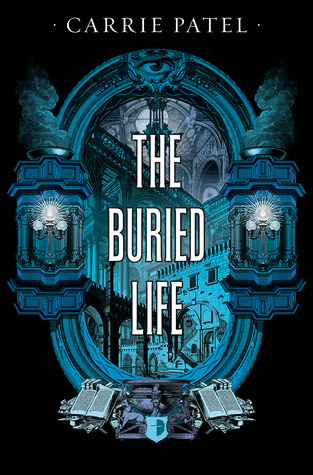 If you’ve read many of my reviews you’ve probably seen me mention one of my favorite sci-fi publishers, Angry Robot Books.  No…I get no kickbacks or preferential treatment for mentioning them.  I like them because they take risks.  They remind me of what DAW books was like in the 1970’s … edgy sci-fi that didn’t fit into the big publisher models. And Angry Robot does that today… sci-fi that doesn’t conveniently fit under the labels.  And so I never know quite what to expect when I start a new series from Angry Robot.

What surprised me most about Carrie Patel’s The Buried Life is how little sci-fi/fantasy there appears to be in the book.  More than once I scrolled back to the front of the book to see the publisher’s imprint because this struck me as a mystery and not a sci-fi story.  But there’s Angry Robot surprising me once again.

The Buried Life is a mystery in a post-apocalyptic world.  The city of Recoletta is an underground city, as is much of the United States, following a great war a hundred years prior.  But it hasn’t taken long for a division of elite and labor classes to develop, and though this is set in a post-apocalyptic future, the feel is very Victorian, making this a bit of a steampunk-like read.

One of the elite is murdered and inspector Liesl Malone is tasked with solving the case.  This world of the upper class is new to Malone and it isn’t easy to get information from a crowd unwilling to welcome someone from a different class.

In addition to Malone, we get an insider look at the upper class from a servant.  Laundress Jane Lin is also looking for a truth in the case of this murder and because of her position as someone who generally has access to the elite areas but remains invisible to those around her she has a unique perspective.

While the sci-fi/fantasy aspect is important to the story, it tends to hang like a backdrop rather than a front and center curtain for the reader.  Really, it’s the mystery that is in play here and the development of the major characters (Malone and Lin) that drives the story.

I found the mystery interesting.  Though a little tame by some standards, the characters of Malone and Lin helped this.  I definitely want to get to know these people better and hopefully there will be a little more depth to them and to some of the surrounding characters in future books.

Looking for a good book?  The Buried Life is the first book in a new series by Carrie Patel.  Mostly a mystery in a sci-fi setting, this promises to be an interesting series.