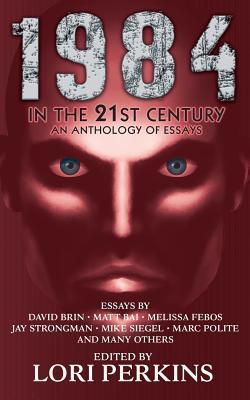 Well, it didn’t take long for someone to put out a collection of essays relating George Orwell’s 1984 with the Donald Trump presidency.  Of course it’s been the lingo in the press and on social media since Trump won the U.S. election and editor Lori Perkins, who writes in her introduction of having had affection for 1984 for a long time, has pulled together a series of previously published short articles and essays reminding the reader of the similarities between Trump’s political bureaucracy and the famous world of ‘big brother.’

Most of the essays are very short. A couple of Kindle-pages in length for some of them.  And actually, most of them don’t really offer any new insight or comparisons.  Anyone who spends time on Facebook will encounter much of the discourse that is here (though perhaps without the vehemence and inciting rhetoric).

None of these essays/articles stood out as exceptionally keen or insightful – as I say…this discourse is already taking place on social media and in various presses (which is where these come from).  But the advantage is that Perkins has gathered a number of them and brought them together.

One of the more interesting, or at least daring, articles was “Why Orwell’s Sudden Best-seller 1984 is More Applicable to Obama Than Trump” by Jay Strongman.  One of my least favorite pieces (surprisingly, perhaps, given my ‘other’ job in the professional theatre, was “Orwell in America — The Play” by Joseph Sutton which, first of all, was only the beginning portion of the play, and secondly, wasn’t all that interesting.

And of course there’s no small part of this that is taking advantage of the tremendous, sudden interest in Orwell’s 1984 and the sitting U.S. presidency of Donald Trump.  Thanks to ebooks and print on demand, it’s much easier for writers/editors/publishers to get books in front of the reading public very quickly.

Introduction by Lori Perkins
“George Orwell and the Self-Preventing Prophecy” by David Brin
“1984 Was the Catalyst of Our Conversation” by David Jester
“How 1984 Can Decode Trump’s First 100 Days” by Alexander J. Urbelis
“Big Media is Big Brother” by Mike Siegel
“Controlling The Present: How 1984 Predicted ‘Alternative Facts’ and ‘Fake News’” by Marc W. Polite
“Trump is not Orwellian: He is the Distractor-in-Chief” by Matt Bai
“Why Orwell’s Sudden Best-seller 1984 is More Applicable to Obama Than Trump” by Jay Strongman
“1984: The Facts on the Ground are Emotions” by Alan Saly
“Sure, It’s “1984” Again—And I Know It” by Perry Brass
“Goodbye My Safety Blanket” by Stephen B. Pearl
“Archie Andrews’ Orwellian Adventure” by Tim Hanley
“Big Brother Sam” by Boze Hadleigh
“The Year of My Dystopia” by Tracy Lawson
“1984 and Walden: A Time and a Place in Two Volumes” by Tamara Rose
“What We Desire Must Be Valued” by Rona Gofstein
“George Orwell Through the Looking Glass” by Melli Pini
“Why Don’t You “Like” Me?” by Maximilian Ximenez
“2017 Should not be 1984” by Sherri Donovan
“Orwell’s 1984: Are We There Yet?” by Sean Fitzpatrick
“Teaching After Trump” by Melissa Febos
“Why We Teach 1984 Today” by Ruth-Terry Walden
“They Love Big Brother by Aaron Zwintscher
Feminism in George Orwell’s 1984” by Tara Lighten Msiska
“Orwell in America—The Play” by Joseph Sutton
“Coming to a Theater Near You, Again” by Adam Birnbaum and Dylan Skolnick

Looking for a good book?  If you are a fan of George Orwell’s 1984, or concerned about how much like 1984 our political system has devolved to, you may enjoy the insight, thoughts, and concerns expressed in the series of brief essays collected by Lori Perkins in 1984 in the 21st Century.